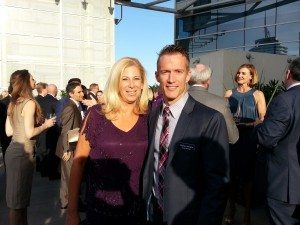 I once again had the great honor to serve as the National Event Co-Chair for The American Fertility Association’s Los Angeles awards gala, Illuminations, held May 3 at The W Hollywood. The annual Illuminations events in L.A. and New York are fundraisers for The American Fertility Association (theafa.org), a non-profit organization that helps families of all kinds create their families of choice by providing education, resources and outreach programs on reproductive and sexual health, infertility prevention and treatment, and family-building options such as adoption and assisted reproductive technology. I am proud to serve on The AFA’s board of directors.

We were fortunate again this year to have an extraordinary group of honorees: Embryologist David Hill, Ph.D., E.L.D., H.C.L.D.; businesswoman and philanthropist Jeanne K. Pritzker, and Jeffrey Arden Bernstein, Esq., a partner with entertainment law firm Jackoway Tyerman Wertheimer Austen Mandelbaum Morris & Klein, a gay, single dad, and someone who exemplifies those to whom The AFA opens its arms in compassion and support.

Bernstein’s father died a few days prior to the Illuminations event, but he and his mother attended nevertheless. Bernstein dedicated his award to his dad.

Dr. Hill is a renowned scientist whose entire career has been devoted to providing leadership in the field of reproductive health. As co-founder and Scientific Director of ART, the Laboratory for Assisted Reproductive Technology, which provides clinical services for all patients at the Southern California Reproductive Center, Dr. Hill directs research and physician training in in vitro fertilization, embryo transfer and preimplantation genetic diagnosis. His work has resulted in continuous improved pregnancy rates through applied research and a gift for recognizing and utilizing new technologies in improving fertility. He also is co-principal investigator on a study of the development of stem cell lines as a potential cure for human disease.

Jeanne Pritzker is founder and CEO of Foster Care Counts, a nonprofit organization dedicated to improving the lives of current and former foster children. A successful businesswoman, entrepreneur and philanthropist, Pritzker was preparing to celebrate the bar mitzvah of her eldest child when she and friend Debra Katler-Kupetz hit on the idea of utilizing the party setup for a Mother’s Day celebration the following day as a treat for deserving foster moms. Before long the small event for a handful of foster families had evolved into “a major annual event serving hundreds of families and supported by hundreds of volunteers. Haircuts in the driveway, light refreshments, and music evolved into professional hairstylists from Paul Mitchell and food for everyone from Wolfgang Puck Catering and Nestle,” according to information on the Foster Care Counts website. In 2012, Pritzker; her husband, venture capitalist Tony Pritzker; and friends launched Foster Care Counts (fostercarecounts.org) with a mission to match willing volunteers with foster families in need and to raise funds for nonprofit organizations serving foster youth and families.

In presenting Jeff Bernstein’s award, Jackson said, “Nearly 10 years ago, The American Fertility Association realized that family building encompassed not only helping people with infertility to conceive a child, but also included the LGBT community, whose desire to have children is no less than that of their straight counterparts. So The AFA worked diligently to create a pathway to parenthood for all hopeful parents….

I am most proud to be a part of Illuminations LA and of the important funding support it provides, via the work on The American Fertility Association, to all types of families, regardless of who they are and how they were created.