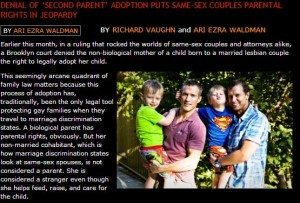 Earlier this month, in a ruling that rocked the worlds of same-sex couples and attorneys alike, a Brooklyn court denied the non-biological mother of a child born to a married lesbian couple the right to legally adopt her child.

Brooklyn Surrogate’s Court Judge Margarita López Torres based her ruling on the fact that New York recognizes the couple’s marriage, and the names of both mothers appear on the child’s birth certificate. Thus, the judge wrote in her decision, citing case law, the non-biological mother is already the legal parent of her child.

The “purpose and effect" of adoption is “…to create a new legal relationship where one did not previously exist. Adoption is not utilized for, nor…is it available to reaffirm, an already existing parent/child relationship.”

In her decision, Judge López Torres acknowledged the couple’s purpose in seeking the second-parent adoption—to establish the non-biological mom’s parental relationship to the child should the family travel to places where same-sex marriage is not recognized and same-sex couples are not recognized as parents, as is the case in many parts of the United States and many other countries.

The petitioner appears to have filed the instant application out of an abundance of caution, perhaps to ensure that, with the support of judicial imprimatur, her existing parental relationship with the infant is less susceptible to challenge in the event of the family's re-location to a jurisdiction less hospitable to the rights of same-sex couples to marry and adopt children. Indeed, the court is mindful of the uncertainty occasioned by the tectonic shifts occurring in the geography of our culture's definition of "family," particularly with respect to the increasing recognition of the right to marriage equality and adoption by same-sex families, as well as the ethical complexities arising from assisted reproductive technologies.However, the relief sought herein by the petitioner is neither necessary nor available.

In fact, the concern is more than theoretical to the mothers. According to a New York Times report, the non-biological mom, Amalia C., has family in Florida and Nicaragua, neither of which recognize same-sex marriage. Were birth mother Melissa C. to be incapacitated or killed while the family was visiting one of those locales, Amalia’s parentage of and right to make decisions for their child might very well be called into question or denied.

The couple’s concerns are among the reason that most family law and fertility attorneys advise same-sex couples to obtain a court order of parentage, even if both their names are listed on their child’s birth certificate, even if their marriage is legal and fully recognized in their home jurisdiction.

Judge López Torres in her decision questioned whether a jurisdiction that refused to recognize a New York-sanctioned same-sex marriage would honor a second-parent adoption granted a same-sex partner. But in the United States, even in jurisdictions where same-sex marriage or parentage orders are not recognized, adoptions are afforded full faith and credit under the law. And that is why it remains essential that same-sex parents be offered the “supplemental” protection of adoption.

A court order of adoption provides legal protections to both parents and child. A second-parent or step-parent adoption order serves to document the child’s parentage in the event a couple later separates and one partner seeks to be relieved of his or her obligation to provide financial support to the child.

Judge López Torres appears to have based her decision on a heart-felt conviction that married same-sex couples should be treated just like any other married couple, and on the long-standing legal presumption that a child born into a marriage is the legitimate child of both partners. It is a compelling and egalitarian argument, an affirmation of equal rights for LGBT people. Problem is, we’re just not there yet. There are too many places where LGBT people do not have full equality, and where same-sex relationships are denied any legitimacy; indeed, places where whipping out your same-sex marriage certificate might even land you in jail or put your life in danger. In our increasingly mobile and globalized world, to expect a family to huddle in place in a jurisdiction that grants them legitimacy, never venturing to other states or countries, would be a true denial of equal rights. In seeking to affirm their equality, Judge López Torres’ decision instead denied the Brooklyn family the legal protection and security they deserve and that, until we gain full continuity in the law, in the U.S. and internationally, we must continue to advise same-sex parents to seek.