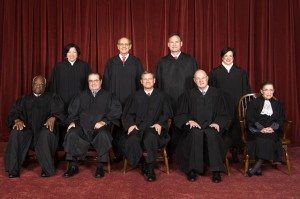 08 Oct DOMA Likely to Get Supreme Court Hearing This Session

The United State Supreme Court returned from its summer break to face the largest number of LGBT equality cases it has ever faced in a single term. Three critical cases have the potential to make significant changes in how the government embraces the LGBT community.

Case 1: Defense of Marriage Act (DOMA), should same sex couples be recognized by the Federal government? Nancy Gill, a 21 year employee of the United States Post Office, receives “Self and Family” health insurance for herself and
two children she has with her female spouse, Marcelle Letourneau. However, she is unable to share her medical benefits and retirement with her spouse because their Massachusetts marriage is not recognized under U.S. law. (http://www.ca1.uscourts.gov)

This is just one of seven plaintiff stories presented in the Gill v. Office of Personnel Management case, and many similar cases are making their way up the ladder to the Supreme Court as well. Gay and Lesbian Advocates & Defenders (GLAD) assisted Gill in filing a complaint with the federal district court arguing that Section 3 of the Defense of Marriage Act (DOMA) is unconstitutional based on the Fifth Amendment, equal protection, and it discriminates against gay and lesbian individuals married to someone of the same sex. This case has been in motion for years and now awaits a Supreme Court decision on whether same-sex and heterosexual married couples should be entitled to the same federal benefits such as medical insurance, Social Security retirement benefits, and tax benefits.

Case 2: Section O, allowing same-sex couples to continue medical benefits from the state. In 2008, Arizona’s administrative code was amended to extend state-employee benefits to qualified domestic partners, same or opposite-sex. However, with budgetary issues weighing heavily in the  balance, the state amended the benefits to include only employees’ spouses.

Because the state of Arizona doesn’t recognize same-sex marriage, state employees with same-sex partners enrolled in the state’s medical benefit plans were notified that their benefits would be ended due to the changes. Of primary concern is the damage to those now being denied health benefits: How will they obtain new medical coverage, and at what cost?  (http://www.ca9.uscourts.gov)

When will we know more? Unfortunately, things are still unclear. These three cases are still in limbo as of the most recent Supreme Court conference to fill the docket. The Supreme Court has announced its acceptance and denial of a variety of cases, but none of these three highly controversial cases were on the list, implying the Court will consider whether to take them at a later date. Some court-watchers suggest the Justices want to combine the DOMA and Prop 8 cases to hear them all in one sitting.

Former U.S. Solicitor General Paul Clement, who is defending DOMA before the Supreme Court, told a panel at University of Southern California’s Gould School of Law on Oct. 4 that he believes the court is likely to take the DOMA case this session. “I think it’s going to be very difficult for the court not to take the DOMA case,” Clement said, as quoted by the USC Daily Trojan. “When the Court of Appeals strikes down an act of Congress as unconstitutional, the court will generally take that case up.”

With no word yet on when or if the U.S. Supreme Court will hear the three cases, thousands of gay and lesbian Americans anxiously wait to learn when their equal rights will receive a court hearing.