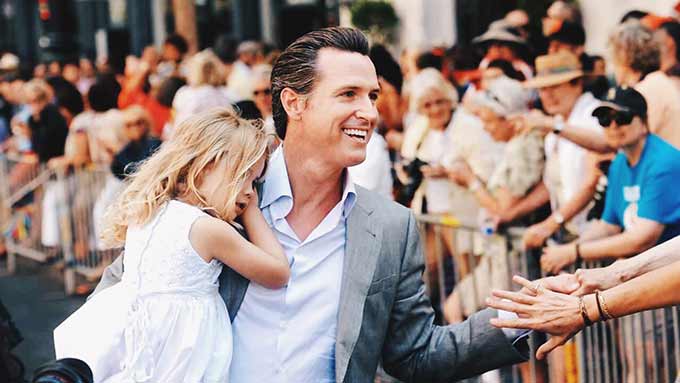 08 Jun Why I Support Gavin Newsom for California Governor

As a young gay professional back in the early 2000s, I can remember thinking it might be legal someday for me to marry my partner in my resident state of California, but I figured it would be a very long time coming. George W. Bush was in the White House; the country was embroiled in a heated presidential race and still reeling from the devastation of 9/11. The U.S. was mired in an increasingly chaotic Iraq conflict with no plan to win the peace.

Same-sex marriage was far from culturally accepted, even in liberal California. As the Los Angeles Times reported in a 2015 retrospective:

Prominent Democrats—including both of the state’s U.S. senators, from the Bay area—were opposed to gay marriage. National Democrats worried about the impact on the 2004 presidential nominee, John Kerry. (When Kerry lost, some blamed Newsom for stirring up the culture wars.)…

Remember, just a few years later, in 2008, California voters, following a demonizing and fear-based campaign, would pass the anti-marriage Proposition 8—leaving some 18,000 same-sex couples legally married, but denying the right to thousands of others who didn’t make it under the bar.

In the early 2000s, even in the LGBTQ community, the issue of same-sex marriage was controversial. The consensus of many of the “establishment” LGBTQ advocacy organizations and community leaders was that the time was not right to push the issue—the political will to change was lacking, they said.

Then, on February 12, 2004, San Francisco Mayor Gavin Newsom instructed the city-county clerk to begin issuing marriage licenses to same-sex couples, making the city the first in the nation to do so. Because same-sex marriage was illegal everywhere in the U.S., Newsom’s move shocked the nation and thrilled the LGBT community. Experienced advocates clucked that it would result in a backlash; Democrats said it would hurt Kerry’s presidential chances, as the L.A. Times reports. Court-watchers said it was too soon to bring the issue to the courts—public opinion was not up to speed. California Attorney General Bill Lockyer sued to end San Francisco's rebellion.

But for a frantic, heady month, until March 11, 2004, thousands of couples flocked to the historic San Francisco City Hall. Total strangers were enlisted as witnesses, brides and grooms lined up in tuxedos and gowns, supporters brought cakes and flowers. Scene after scene of elation filled the nightly news. Perhaps as never before, America witnessed what marriage equality was and how much it meant to thousands of their fellow citizens, who—surprise, surprise—didn’t look or act all that much different from themselves and their own loved ones. By the time the California Supreme Court shut it down on March 11, some 4,000 marriage licenses had been issued to same-sex couples; in August 2004, all were ruled invalid.

Later, following the 2015 U.S. Supreme Court decision legalizing same-sex marriage throughout the United States, Newsom would admit that the criticism, particularly from his own party, had wounded him. But even when the blame for Kerry’s loss to 43 was cast at Newsom's feet, he never demurred; he said and continues to say that he did what he believed was right. As he told Mother Jones in its 2015 report:

“I can assure you people would have said the same thing back in 2006, when we were trying to take back the House. People would have said, 'Hold on, now. More vulnerability, and with all these swing counties across the country, this is the last thing we need now. Young man, just hold on.' And then of course, in 2008, they would say, 'Wait a second, we’ve got to win the White House. This is not the right time!' Only to go back to 2010: 'We’ve got a midterm! And this is a wedge issue. Public opinion is not there yet.' And then of course, miraculously, in 2012, public opinion began to change. Well, it wouldn’t have changed if folks had not pushed the issue.”

While it’s difficult to quantify exactly what impact Newsom’s eloquent gesture had on the movement for marriage equality, we know that in our system of representative democracy, sometimes radical action is needed to spur moderate change. Newsom's action and the resulting court case led to the 2008 In re Marriage Cases ruling by the California Supreme Court, which legalized same-sex marriage in California.

Newsom himself says the “unsung heroes” of the marriage equality movement are the LGBT people who took the risk of showing their neighbors who they are. “It’s the millions—I mean, literally millions—of conversations that were held and won on this topic that changed it,” Newsom told Mother Jones in 2015. “Debates, screaming matches amongst family members, emotional engagement between generations, talking about this issue, putting a human face on this issue, reminding people that this is about our barber, this is about the butcher.... At the end of the day I don’t think it was more complicated than that.”

As the images of rejoicing, loving same-sex couples became more familiar to millions of Americans, and as those couples' stories were told, so public opinion evolved. As of May 2013, 58 percent of Californians approved of gay marriage, including more than a quarter of conservatives and 35 percent of Republicans, the LA Times reported.

Just 36 and little-known then outside of the Bay Area, Newsom bucked his party leadership and staked his career on his determination to seek equality for LGBT people—because he believed it was the right thing to do. “The one thing that connects every single one of us regardless of our station in life and our backgrounds is the desire to be loved and to love,” Newsom told the L.A. Times. “For that to be denied because of a quirk of fate, because you happen to love someone of the same sex, is wrong.”

In taking a stand for marriage equality, even in the face of criticism from his staunchest supporters, Newsom showed us he has the courage of his convictions. Particularly at this time, when our community’s, our state’s and our nation’s most cherished values are under attack, it is important to support leaders who will do what they know is right, even when it is not popular. Newsom’s stand on marriage equality was called contrarian, ahead of the curve, yet he stood his ground, even in the face of opposition from his own party leadership—not to gain more Twitter followers, but because he believed it was the right thing to do. In doing so he modeled the kind of strong, decisive leadership California and the United States need so badly today. That is why I support Gavin Newson for California Governor.

That’s why I’m honored to serve as one of the honorary hosts for a fundraising reception Monday, June 26, at the home of my colleague Michael Kraut and Dan McCarty in support of Gavin Newsom for Governor 2018. If you will be in the L.A. area, please join Michael and Dan, along with co-hosts Alyssa Milano, Wendy Segall, Lisa Daruty, David Cooley, Bash Kazi, my spouse, Tommy Woelfel, and me for what promises to be a fun and historic occasion. You may RSVP by contributing online at https://secure.actblue.com/contribute/page/kraut2017,  or contact Katie at (213) 293-5852 or katie@gavinnewsom.com. Click for more event information and a downloadable flyer: https://iflg.net/wp-content/uploads/GavinNewson.pdf. Donations are payable to Newsom for California – Governor 2018 (FPPC ID#1375287).