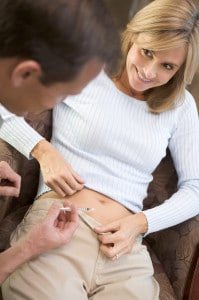 Boston IVF, a medical practice specializing in assisted reproductive technology (ART), has received a two-year, $1 million grant from the U.S. Department of Health and Human Services. The grant is being used to promote donation of frozen embryos for use in training of fertility treatment providers and to help infertile individuals become parents. In collaboration with Brandies University, one of Boston IVF’s goals is to create educational programs targeted to both patients and the medical community.

“A major goal of the Frozen Embryo Donation Service is to develop training programs for infertility clinics, including physicians, nurses and mental health counselors, and facilitate new protocols to support embryo donation in the U.S.,” said Alison Zimon, MD, a Reproductive Endocrinologist at Boston IVF and Principal Investigator for this program. “At the same time, we are also creating education and support services for both potential donors and recipients, to promote embryo donation as an important option that can help thousands of infertility patients who cannot use their own eggs, sperm or embryos to achieve pregnancy.”

With more than a dozen IVF Centers located throughout New England, Boston IVF is one of the premier sites for leading edge reproductive technologies. Boston IVF has received two of the largest government grants issued for the study of fertility issues.

The embryo adoption program is authorized under Section 301 of the Public Health Service Act. In fiscal years 2002, and 2004 - 2010. Congress earmarked funding in the HHS [Health and Human Services] annual appropriations act for an embryo adoption public awareness campaign. The purpose is to educate Americans about the existence of frozen embryos (resulting from in-vitro fertilization) which may be available for donation/adoption for family building.

According to some estimates, there are as many as 600,000 healthy, viable frozen embryos that could be used to create families for couples unable to conceive. The embryos are the result of thousands of IVF cycles that have resulted in successful fertilization but in which the embryos have not been implanted and remain unused.

Frozen embryo adoption is a controversial issue, sometimes viewed as a solution by those who view creation of a viable embryo without implantation as tantamount to taking a life. Regardless of the political and ideological implications, the potential benefit to intended parents who might otherwise be unable to have a family is without question.