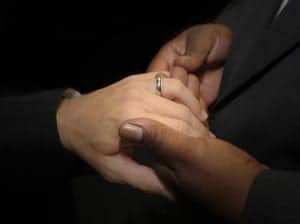 As the saying goes…there’s more than one way to skin a cat, and the Obama administration, via U.S. Attorney General Eric Holder, has been vigorously demonstrating that colloquialism in the matter of same-sex marriage.

As reported by Politico in early February:

In a speech to a gay rights group in New York, Holder will promise that Justice Department lawyers will respect spousal privilege for same-sex couples in court proceedings and that officials will award full benefits to same-sex spouses of police officers and other public safety personnel killed in the line of duty.

Holder followed that announcement a couple of weeks later with a statement that state attorneys general in states that ban same-sex marriage “are not obligated to defend laws that they believe are discriminatory,” The New York Times reported.

Mr. Holder was careful not to encourage his state counterparts to disavow their own laws, but said that officials who have carefully studied bans on gay marriage could refuse to defend them.

Holder continued by saying state attorneys general are within their authority to refuse to uphold laws that they have, upon careful review and consideration, determined to be in contradiction to equal rights granted under the U.S. Constitution, citing the 1954 U.S. Supreme Court case, Brown v. Board of Education, which mandated the integration of U.S. public schools.

While it’s not possible to legislate hearts and minds, such outspoken support for LGBT equality from the U.S. Attorney General’s office confers credibility and mirrors the extent to which the social norms and mores of our country have changed for the better. It is welcome reassurance for same-sex couples who only want the same protections for their relationships and their families that others enjoy—even if the laws in states in which they live aren’t quite there yet.