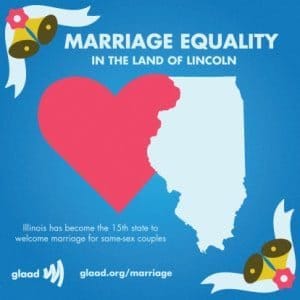 Illinois has become the 15th state to legalize same-sex marriage. Although Governor Pat Quinn has yet to sign the bill into law, he urged state legislators to pass it and has promised to sign. Illinois Senate Bill 10, the "Religious Freedom and Marriage Fairness Act,” was passed by the Illinois Senate in February, although it had to be reaffirmed by the Senate due to a technicality. Representative Greg Harris who introduced the bill in the Illinois House of Representatives withdrew it in May on the last day of the House’s spring session because it lacked sufficient votes. Supporters of same-sex marriage organized the March on Springfield for Marriage Equality on Oct. 22, the first day of the legislature’s veto session. Harris reintroduced the bill, and it was passed by a 61-54 vote November 5, in the final week of the veto session. Sixty votes were required for passage.

The legislation enjoyed strong support from business and religious leaders as well as Chicago Mayor Rahm Emanuel and President Barack Obama. Even Pat Brady, former chair of the Illinois Republican Party, expressed support for the bill. Despite that signal of bipartisan support, only three House Republicans voted for the bill, reported The New York Times.

Approval of this bill was tougher than most supporters initially expected, given that Illinois already had civil unions and that it had the backing of such politically prominent native sons as Obama and Emanuel. But some Democrats representing conservative districts had concerns that they would pay a political price for a yes vote, particularly in view of opposition from some clergy and other members of the African American community.

Although it is unclear when the Governor will sign SB 10 into law, Illinois same-sex couples could begin marrying as early as June 1, but no sooner, thanks to state procedural rules. As a colleague from Illinois explained, “Illinois law requires that legislation passed after May 31 (adjournment if a regular session) is not effective until June 1 of the following year, absent a 3/5 or supermajority amendment to the contrary—a feat far from possible here, where 60 votes were needed to pass it in the House (it squeaked by with 61), and that would have required 70 to so amend.”

Despite the political turmoil, justice and basic civil, human and equal rights prevailed in the end—certainly something we all can celebrate today!