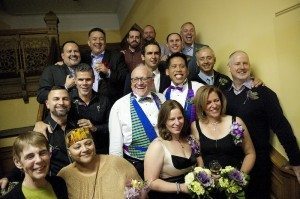 In an abrupt change of course yesterday, New Jersey Governor Chris Christie withdrew his appeal of a state court ruling legalizing same-sex marriage in the state. The governor’s withdrawal followed a ruling by the State Supreme Court upholding the lower court ruling and authorizing same-sex marriages to commence yesterday. Although Christie’s administration officials said the Governor continues to disagree with the court’s action, he acknowledged his constitutional duty to uphold state law.

Some New Jersey locales began issuing licenses to same-sex couples as early as last Thursday, before the date when same-sex marriages could begin was certain; other areas continued to refuse to issue licenses even after the high court ruling. Scores of gay and lesbian couples lined up at county courthouses throughout the state to apply for marriage licenses or to be married yesterday, and the flood of marriages is expected to continue as couples are able to obtain licenses.

See Two Steps Forward, One Step Back for more about the New Jersey marriage ruling.