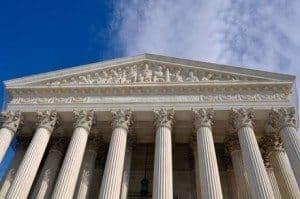 Amid all the excitement and media furor surrounding the U.S. Supreme Court’s gay marriage decisions this past week, another ruling has generated strong and conflicting opinions among many of my attorney colleagues. The decision was related to the Indian Child Welfare Act (ICWA), which was enacted in the late 1970s primarily to protect against the involuntary removal by child welfare authorities of children from Indian families for placement in non-Indian homes.

As we described the case, argued before the Supreme Court on April 16, in an earlier post:

[A] non-Indian birth mother… is seeking to place her child for adoption with a non-Indian South Carolina couple. The child’s biological father, a member of the Cherokee Nation, objects to the proposed adoption, saying he wants to raise the child. Because the father did not live with the mother and child prior to the child’s placement for adoption and did not provide financial support for the child during pregnancy or after, South Carolina law does not require his consent to the adoption. But because the father is Cherokee, the Supreme Court is being asked to decide whether the father is required to meet the criteria of the state law or whether ICWA invalidates that requirement in this case.

On Tuesday, June 25, the court ruled in favor of the birth mother and adoptive couple in this case. Read the full opinion here: SCOTUS ICWA Ruling 6 25 13

The ICWA was enacted before family formation via assisted reproduction was common and does not address ART situations. Tuesday’s Court decision said nothing about the implementation of ICWA as it relates to ART.