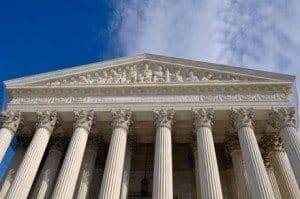 The U.S. Supreme Court announced today it will consider the case of California’s Proposition 8, passed in 2008, which stripped California same-sex couples of the right to marry. A U.S. District Appeals Court earlier had struck down Prop 8 on the basis it was unconstitutional. Some LGBT advocates are disappointed with today’s announcement because, had the Supreme Court refused to hear the case, same-sex marriage would have resumed in California almost immediately.

The Supreme Court also announced it will hear the case of Windsor v. United States, which challenges the constitutionality of the Defense of Marriage Act, or DOMA. According to the Supreme Court blog, arguments for both cases are expected to be heard around the end of March, with decisions expected near the end of June.