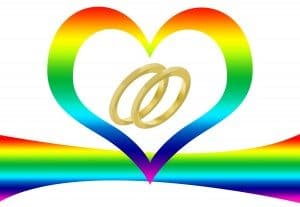 Uruguay’s gay marriage law is somewhat unique in that instead of simply including LGBT couples under the existing legal structure for marriage, as other countries have done, it changes the legal terminology to make it gender-neutral, reported The Huffington Post:

While some countries have carved out new territory for gay and lesbian couples without affecting heterosexual marrieds, Uruguay is creating a single set of rules for all people, gay or straight. Instead of the words "husband and wife" in marriage contracts, it refers to the gender-neutral "contracting parties."

The new law allows all couples, gay and straight, the same rights to adopt or become parents via in vitro fertilization and to decide which parent’s surname comes first on their child’s birth certificate.

Exciting news, as we in the U.S. anxiously await the Supreme Court’s verdict on marriage equality, or to learn whether it will even make a significant decision on the issue at this time. Who could have imagined 10 years ago that so many deeply religious and conservative countries would embrace LGBT equality before the U.S. did?