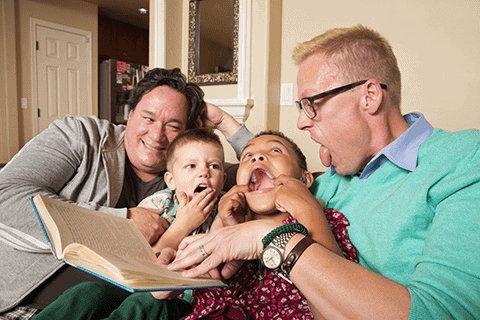 Huffington Post recently published an article by guest writer Lora Liegel about her experience as a legally married lesbian mom compelled to undergo “second-parent” adoption of her son, Finn, in order to protect her family and her own parental rights. As I have heard so often from intended parents at our firm, International Fertility Law Group, being forced to undergo the stress, expense and inconvenience of adopting one’s own child can feel humiliating, alienating and unfair… and it is. Unfortunately, until uniform laws are adopted throughout the U.S., second-parent adoption is still the “gold standard” for protecting the rights of same-sex parents via assisted reproduction.

I recently returned from the National LGBT Bar Association meeting in New York City, where stories like Liegel’s, and the lessons and advice stemming from these stories, are repeatedly echoed and discussed. Liegel learned, as have so many LGBT parents and intended parents, that, even though same-sex marriage was legalized by a U.S. Supreme Court ruling in June 2015, same-sex couples and LGBT individuals still are treated differently than heterosexuals when it comes to parentage laws.

As we reported shortly after that historic Supreme Court decision, the change in marriage law at the federal level still leaves states with the question of how to integrate the change with existing state statutes governing everything from the terminology used on official birth certificates to the parental status of surrogates.

The change in federal law left states to determine how to adapt their laws, rules, processes and official forms related to marriage and parentage to comply with the Supreme Court decision. Prior to June 2015, U.S. laws governing parentage, adoption and assisted reproduction technologies such as surrogacy, egg and sperm donation were a patchwork, differing from state to state. That patchwork still exists today, as state legislatures, state agencies and the courts try to hammer out the details of changes in the law, case by case. In the meantime, family law and ART attorneys counsel LGBT clients to continue taking extra measures to ensure their parental authority is recognized, regardless of where they travel.

Liegel’s son was conceived by anonymous sperm donation using her wife’s egg; her wife carried the baby and gave birth. With no biological relationship to her son, Liegel discovered, her parental rights could be in jeopardy:

After doing some research, I discovered that discrimination based on sexual orientation or gender identity is still legal in the majority of states. If I ever moved out of the “gay friendly” Northwest, my parental status might go unrecognized or be challenged. If our family went on vacation somewhere that did not recognize my relationship with my son, and he got sick, I could be denied access to his medical records, or not be able to make important decisions about his welfare. And even though we get along, Michelle’s relatives could fight for custody of Finn if she died. Sure, these scenarios may be unlikely, but they could happen.

As I hear so often from clients at IFLG, Liesel felt insulted by being deemed the “second parent.”

Still, I couldn’t get that term ― “second parent” ― out of my head. In a heterosexual relationship, parents just get to be called mom and dad ― there is no “first” or “second.” Not only was I considered “second,” but I was being forced to navigate a complicated, confusing, and expensive legal system to be seen as a legitimate parent, something I already was. I felt like I was being told that I was lesser than ― that I was unequal ― and it made me furious, but I had no choice but to continue down the path I’d started.

Liesel’s story confirms the personal story I hear time and time again from our clients at IFLG of how hurtful it is to have to jump through so many seemingly pointless bureaucratic hoops to confirm and protect parental rights.  Liesel’s instinct to resist the necessity to “confirm” her “second-parent” status is also familiar.

But to fully protect parental rights and the legal parent-child relationship from attack, it is critical to put emotions aside and consider the bigger picture. None of us can know the future, and even those most solid of relationships may change over time. Should your relationship with a partner end, should a partner or spouse die, should you require medical care for child while traveling through a Deep Red state… any of a number of scenarios could occur that could put your parental authority—and your child’s safety—in jeopardy. For now, even though it is not fair, the second-parent adoption process is the best way to protect LGBT parents (especially lesbian moms). Sadly, for now, we are in “defense” mode as some states resist advances to reproductive freedom and fight to strip rights from LGBT people. But the LGBT family law community is working to change parentage laws to provide permanent and equal protection for ALL families.