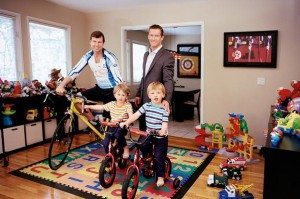 Tommy and I and our boys are featured currently in a London Times Magazine article, Inside gay Hollywood’s baby boom, by Rhys Blakeley.

As the Times article points out, so-called “commercial surrogacy,” in which the surrogate is compensated under the terms of a surrogacy agreement spelling out the rights and obligations of all parties, is not legal in the U.K., despite the growing demand for such arrangements. As the Times Magazine reports:

In 2010, the US Census found that a quarter of same-sex households were raising children and anecdotal evidence suggests that the demand for surrogates – or “gestational carriers” in the industry argot, a term that indicates that there is no genetic link between the child and woman in whose womb it grows – is soaring. In Britain, according to Office for National Statistics figures, some 8,000 same-sex households include dependent children.

One of the unintended consequences of a ban on commercial surrogacy is that many parents seek surrogates from other countries, a trend that raises concerns about potential exploitation of low-income surrogates.

Our part in the article covers Tommy’s and my experience with surrogacy in creating our own family. As I told the reporter:

“You must be prepared for failure. You must have an excellent surrogate. You must be on the same page when it comes to a potential termination. You can’t afford to overlook anything when it comes to health insurance or legal matters. When you decide this is the route you’re going to take, whether you’re gay, straight or single, you become vulnerable.”

Articles like this one reflect the growing awareness of lesbian and gay couples that it is possible for them to become parents via assisted reproductive technology. There is little doubt that the movement for LGBT equality is having a powerful influence on public opinion in Britain, as it has in Australia, France and elsewhere.