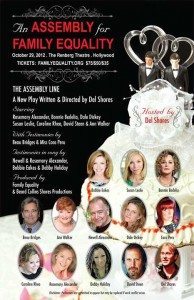 Tommy and I were so honored, with our two boys, Austin and Aiden, to be featured recently in a new one-act play by Del Shores, The Assembly Line. The play, which was loosely based on our family’s story, premiered October 29 at the Renberg Theater in Los Angeles. Proceeds from the one-night-only performance benefited the Family Equality Council, a non-profit organization representing some million LGBT parents and their two million children from all over the United States.

The Assembly Line is the story of a group of women from the Assembly of God faith who get together once a week to stuff envelopes for a southern evangelical preacher. The women’s normal routine is thrown into upheaval when one of the regulars is strangely absent, sending her housekeeper in her place. Through the course of training the replacement (in the exact technique of envelope stuffing), it is revealed that the missing member of the assembly line has gone to Vermont to attend her gay son's gay wedding, her heart having changed with the birth of her grandchildren, the grooms' twin sons. You can read more about the performance here.

At the end of the play, Tommy and I and our boys represented the grooms and their sons in a symbolic wedding scene. The boys were very excited to be onstage but turned out to be little troopers and stayed quiet—they understood that none of us were supposed to say anything. At one point, Austin put his finger in his mouth (sort of in a "what do I do here?" kind of way). Aiden, who I was holding, didn’t know what to do either, so he turned and kissed Papa, and Austin followed suit kissing Daddy, which got a great audience reaction. After the performance, it was great to meet all the actors and audience members, most of whom didn’t realize we were the real-life models for Del’s characters.

I thought about that wedding scene last night, as I stayed up late watching the election results. Not only do we have four more years of an administration that believes in our equal rights as a family, but three states—Maryland, Maine and Washington—made history: For the first time in the United States, voters supported marriage equality at the ballot box. That surely marks the tipping point for LGBT equality in our country. I know it has tremendous significance for same-sex parents who want equal legal status and security for their families.

The Family Equality Council began in 1979 as the Gay Fathers Coalition, which expanded in 1986 to include lesbian mothers as Gay and Lesbian Parents Coalition International, a volunteer grassroots chapter-based organization supporting local gay and lesbian parenting groups and advancing the cause of lesbian and gay parenting. In 1990, a group of youth formed an offshoot of GLPCI called Just For Us, which evolved to become the group Children of Lesbians and Gays Everywhere (COLAGE). COLAGE became an independent  organization on January 1, 1999. In 1998 GLPCI changed its name to the Family Pride Coalition and finally to Family Equality Council, in recognition of its expanded work as an advocate, in partnership with other progressive groups, for equality for all loving families.

Family Equality Council is a wonderful organization and worthy of your support. Del Shores plans a nationwide theatrical event in which The Assembly Line will be performed simultaneously on the same Monday in 2013 in theatres throughout the U.S., with all proceeds going to the Council. We’ll share the date when we have it. We are proud to be a part of the Family Equality Council family.