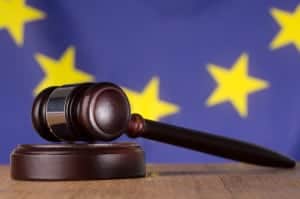 26 Mar EU Denies Paid Leave for New Moms Via Surrogacy; U.K. Does Opposite

A recent ruling by the European Court of Justice (ECJ) denied the claims of two mothers via surrogacy who had petitioned their employers for maternity leave and had been refused. The two cases, which were referred to the high court of the European Union by a UK and an Irish employment tribunal, concerned two women who had become mothers via surrogacy. One of the women also is the genetic mother of her child. Both women were denied paid maternity or adoption leave by their employers.

The ECJ ruled that the Pregnant Workers Directive, the EU law governing maternity leave, is only applicable to women who become pregnant and give birth to their children. Intended mothers via assisted reproductive technology, are ineligible for the paid leave.

[T]he objective of that directive is to encourage improvements in the safety and health at work of pregnant workers and workers who have recently given birth or who are breastfeeding, such workers being considered a specific risk group. In that directive, the provision relating to maternity leave expressly refers to confinement, and its purpose is to protect the mother in the especially vulnerable situation arising from her pregnancy. The Court adds that although maternity leave is also intended to ensure that the special relationship between a woman and her child is protected, that objective concerns only the period after ‘pregnancy and childbirth’. It follows from this that the grant of maternity leave pursuant to the directive presupposes that the worker concerned has been pregnant and has given birth to a child. Therefore, a commissioning mother who has used a surrogate mother in order to have a child does not fall within the scope of the directive….

While the court ruling exempts EU employers from the mandate to grant paid maternity leave to mothers via surrogacy, it also states that member nations may establish their own rules providing a paid leave benefit to intended mothers via assisted reproductive technology.

The ECJ also ruled that the employers’ denials of maternity leave to the two women did not violate European Union laws prohibiting discrimination on the basis of sex or disability.

As regards the Equal Treatment Directive, the Court finds that a refusal to grant maternity leave to a commissioning mother does not constitute discrimination on grounds of sex, given that a commissioning father is not entitled to such leave either and that the refusal does not put female workers at a particular disadvantage compared with male workers….

Lastly, as regards the Employment Equality Framework Directive which prohibits any discrimination on the ground of disability in employment and occupation, the Court considers that it cannot be disputed that a woman’s inability to bear her own child may be a source of great suffering for her. However, the concept of ‘disability’ within the meaning of that directive presupposes that the limitation from which the person suffers, in interaction with various barriers, may hinder that person’s full and effective participation in professional life on an equal basis with other workers.

In contrast was action taken, on the same day, by the United Kingdom (also a member of the EU). The UK Parliament ratified the Children and Families Act 2014, to take effect in 2015, that will give intended parents via ART the same right to paid maternity leave and protection from job loss guaranteed to other U.K. parents. The law was passed after a five-year campaign by family law and ART advocates in the U.K. For more on the successful U.K. effort, visit the blog of my colleague, U.K. family law attorney Natalie Gamble.

The juxtaposition of these two events, one denying intended parents equal rights and protection under EU law, the other extending to intended parents the same benefit afforded by U.K. law to all new parents, offers a birds-eye of the legal landscape worldwide: While in many places laws governing parentage and family formation lag sadly behind the rapidly advancing technology of ART, we see that change is happening for the better, and that more and more ART families are receiving equal treatment under the law. For me it’s an exciting time to practice in this field of law; for intended parents it’s yet another reminder that experienced, knowledgeable legal counsel is essential.