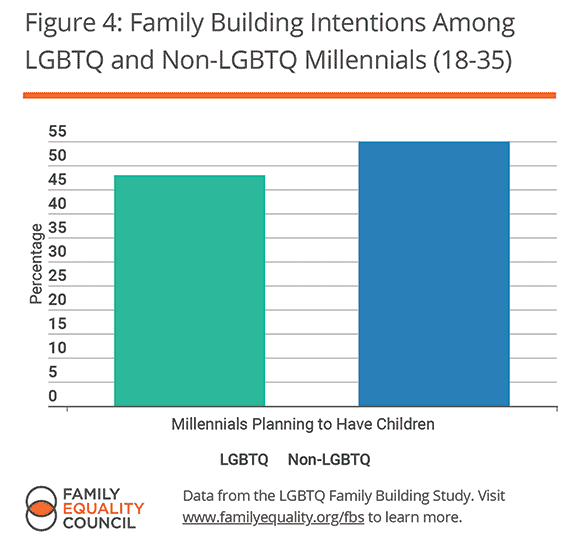 The non-profit organization’s just released Family Building Study, conducted between July 11 and July 18, 2018, shows a generational shift in the propensity of LGBTQ people to become parents. As the survey reports:

Of LGBTQ survey respondents aged 55 years and older, 33% either already have children or are considering having children. This finding is consistent with the 2013 Pew Research Center’s finding that approximately 35% of LGBTQ adults are parents.

However, 77% of LGBTQ “Millennials” (aged 18-35) are either already parents or are considering having children, a 44% increase over their elders (Figure 1).2

Not only is the proportion of LGBTQ people opting for parenthood increasing, the number of people who self-identify as LGBTQ also appears to be on the rise, as more people come out as LGBTQ at younger and younger ages. While the exact number of LGBTQ people living in the U.S. is not known, the Family Building Study cites a May 2018 Gallup poll finding that 4.5 percent of U.S. adults self-identify as LGBTQ. When narrowed to Millennials only, the number jumps to 8.1 percent who identify as LGBTQ – which comes out to more than 6.1 million LGBTQ-identified 18- to 35-year-olds in the United States, 3.8 million of whom are considering or actively planning to start, or add to, families.

In fact, so many LGBTQ Millennials are in family-building mode that they have almost closed the gap with similarly aged heterosexuals, the study shows:

48% of LGBTQ Millennials are actively planning to grow their families, compared to 55% of non-LGBTQ Millennials, a gap that has narrowed significantly in comparison to older generations.

As the study acknowledges, cultural attitudes toward LGBT relationships, marriage and parenting in the U.S. have changed dramatically over the past decade, along with laws governing those institutions. “A decade ago, a majority of Americans still opposed same-sex marriage, let alone equality that extended into the realms of parental rights for all members of the LGBTQ community,” according to the report’s executive summary.

The increasingly tolerant environment and institutional and legal support for justice and equality have made it easier for people to come out at younger ages. In a 2010 survey LGBT people in their 60s reported coming out at an average age of 37, while people then in their 30s reported coming out at age 21, and those ages 18 to 24 reported an average coming-out age of just 17. As a result of this societal pattern, most older LGBTQ people became parents the old-fashioned way, in heterosexual relationships or marriage. Younger LGBTQ people, in contrast, have many more options for relationships and family-building than elders did, including foster parenting, adoption or assisted reproduction.

That leads to another big finding of the Family Building Study: of those estimated 3.8 million LGBTQ people with an interest in or intention to expand their families, 68 percent plan to do so using assisted reproductive technology.

Because historically so little data has been collected about LGBTQ people and their families, the Family Equality Council study makes a tremendous contribution toward helping legislators, policy-makers, medical providers and ART attorneys like me understand the scope and trajectory of this steadily building “Gayby Boom.” In a recent article covering the study results, USA Today reports that although technological advances offer today’s LGBTQ intended parents much better options than their elders enjoyed, bias continues to create barriers in some parts of the country.

The good news from this report has personal meaning to me. As I have written before, when my spouse, Tommy Woelfel, and I came out as young gay men, neither of us dreamed we would ever have the opportunity to become fathers. Sooner than either of us could have imagined, the world changed, our lives changed, and sophisticated reproductive technology made the once inconceivable a reality. Ten years ago, we became fathers to two twin boys, born via the miracles of egg donation, IVF and surrogacy. To those of us who advocate for LGBT equality and work to ensure that all families created via ART are equally protected under the law, progress can sometimes seem frustratingly slow. The Family Equality Council report offers the first concrete evidence that, amid growing societal acceptance and the security of being able to legally marry, more and more young LGBTQ people are eager to experience the joys of parenthood.