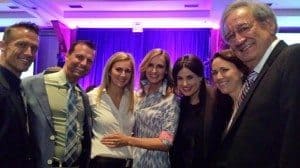 Tommy and I had the privilege of serving on the host committee of the Family Equality Council’s recent gala event, Night at the Pier, in New York, NY, and to join FEC in honoring three individuals who have been leaders in advocating for the equality of the 3 million LGBT parents living in the United States and their 6 million children. The event honored country music star Chely Wright, activist and author Lauren Blitzer-Wright, and Gerald P. Mallon, DSW, Julia Lathrop Professor of Child Welfare and Executive Director of the National Center for Child Welfare Excellence Silberman School of Social Work at Hunter College in New York City.

Wright rose quickly to country music fame: following her debut album in 1994, the Academy of Country Music named her Top New Female Vocalist of 1995. She went on to make seven more studio albums selling more than 1,000,000 copies in the U.S. with more than 15 singles on the Billboard charts. The release of her eighth album, “Lifted Off the Ground,” on May 4, 2010, coincided with the publication of her memoir, “Like Me” (Random House), in which she made history by becoming the first country music star to come out publicly as gay. In her book, and in numerous subsequent television appearances and interviews, spoke of her concern for victims of hate crimes and bullying, particularly LGBT Youth, and of her personal struggles in growing up closeted.  The album and memoir made national headlines.

Today Wright is an LGBT activist and national spokesperson for the Gay, Lesbian and Straight Education Network (GLSEN), a non-profit organization that organizes support groups of students and teachers in K-12 schools to promote personal values and respect for everyone regardless of a sexual orientation or gender identity and expression. In March 2011 Wright launched the LIKE ME foundation, a nonprofit organization serving the LGBT community by providing support, resources and education to individuals, families and friends.  The first LIKE ME Lighthouse was opened in Kansas City, Missouri, to provide staff, counseling and in-house resources for LGBT youth and adults seeking support for coming out, bullying, harassment and gender identity issues. Wright and wife Lauren Blitzer-Wright, who is currently Director of Marketing for Sony Entertainment, are parents to twin boys born in 2013.

Dr. Mallon, who has worked as a child welfare practitioner, advocate, educator and researcher for more than 38 years, was one of the first child welfare professionals in the U.S. to research, write about, and create programs for LGBTQ youth in child welfare settings. He is senior editor of the professional journal, Child Welfare, and author or editor of more than 23 books. His most recent publication is Child welfare for the twenty-first century: A Handbook of practices, policies, and programs published by Columbia University Press in 2014. He has traveled throughout the U.S. and internationally to teach and lecture about child welfare issues, including the unique challenges of LGBT youth.

The Family Equality Council evolved from a 1979 gathering of gay dads, then called the Gay Fathers Coalition, who made a commitment to reach out to and support others like themselves. In 1986 the group expanded to include lesbian moms and changed its name to Gay and Lesbian Parents Coalition International (GLPCI). In 1990, GLPCI launched and eventually spun off a group for children and youth, Children of Lesbians and Gays Everywhere (COLAGE), which became an independent organization in 1999. In 1998, GLPCI changed its mission to include bisexual and transgender parents and changed its name to Family Pride Coalition. In 2007 the organization took the name Family Equality Council.

The evolution of Family Equality Council and its mission mirrors the changes in the LGBT community and in society as a whole, as LGBT people have become increasingly empowered to form families of all different kinds, and as societal acceptance of those families has grown. Tommy and I are so proud to be part of this wonderful organization and to support the important work it is doing in ensuring that other families like ours receive the encouragement and support they deserve.