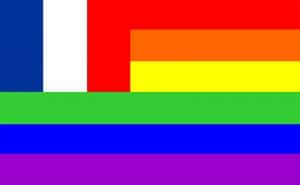 On February 12, 2013, France became the second nation in one month to take the first steps toward marriage equality. Much like the February 5th decision by Britain’s House of Commons, the French Assembly, the lower house of Parliament, voted 329 to 229 to approve the “Marriage for All” bill spearheaded by President François Hollande’s Socialist party.

In addition to legalizing same-sex marriage, the recently passed bill also grants the same right to all married couples to adopt children. The adoption clause was facilitated by an article passed earlier by the Assembly that redefined marriage as a contract between two people.

This defining article was key to the passage of the “Marriage for All” bill because France is unique in its approach to marriage contracts.

France is practically unique in Europe in making it obligatory, for couples who marry, to do so in a civil ceremony, with potential jail terms for priests who conduct a religious ceremony first.

In other countries, priests, rabbis or imams who carry out weddings are also acting as civil officials, and the marriage conducted in church, synagogue or mosque is duly registered in law.

However - as a study by the liberal French think-tank the Thomas More Foundation has noted - in Spain and Portugal people who oppose gay marriage can continue to get married in church, content with the feeling that "their" marriage has nothing to do with the civil one organised by the state and now open to gay people.

But in France, there can be no such separation. The civil marriage in France is compulsory, and so if there is a change in the civil code on marriage, it affects everybody.

Even with France’s unique legal approach to marriage contracts, opinion polls show that approximately 55 to 60 percent of French people support gay marriage. Although this support drops somewhat for gay adoption, the legislation supporting gay adoption remained as part of the bill approved by the Assembly.

The Assembly-passed bill is expected to pass the Senate. Assuming this to be the case, the bill would become law sometime in May or June. This tracks with Britain’s law that also needs to pass the higher chamber. Although some debate is expected in the UK House of Lords, Prime Minister David Cameron has indicated that he expects the law to be enacted sometime in the summer.

Assuming that both France and Britain go on to enact their respective marriage equality legislation, they will join 10 other countries, along with nine states and the District of Columbia, that have legalized same-sex unions including The Netherlands, Belgium, Spain, Canada, South Africa, Norway, Sweden, Portugal, Iceland, and Argentina.

Clearly as these recent legislative victories illustrate, the tide is turning toward acceptance of full equality for LGBT people and the recognition that everyone deserves the right to love and marry the person of his or her choice.