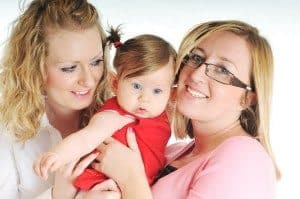 The Gartner family of Iowa received wonderful news on May 3rd when they were notified that the Iowa Supreme Court agreed with them that the Department of Health must include Melissa, the nonbiological mother of the couple’s daughter Mackenzie, on Mackenzie’s birth certificate. But as my colleague, Nancy Polikoff, writes at Beyond (Straight and Gay) Marriage, the Iowa court’s opinion was a mixed bag for gay and lesbian parents.

Mackenzie was born in 2009, the same year that same sex marriage was legalized in Iowa and six months after her parents, Melissa and Heather Gartner, were legally married. At the time of Mackenzie’s birth Melissa and Heather submitted the necessary documents to the Department of Health indicating that Mackenzie was born to a legally married couple, Melissa Gartner and Heather Martin Gartner. Instead of listing both Heather and Melissa on the birth certificate, however, the Department of Health listed only Melissa, the biological mother. According to a Huffington Post report:

At the hospital, the Gartners filled out the form listing both as parents. But when they got Mackenzie's birth certificate back, Heather was listed as a parent and the space for the second was blank.

…the Department argues the government has an interest in the accuracy of birth certificates, the efficiency and effectiveness of government administration, and the determination of paternity.

In its ruling earlier that both mothers must be listed on the birth certificate, the Iowa Supreme Court determined that the arguments put forth by the Department did not have merit.

Therefore, the only explanation for not listing the nonbirthing lesbian spouse on the birth certificate is stereotype or prejudice.

The Department has been unable to identify a constitutionally adequate justification for refusing to list on a child’s birth certificate the nonbirthing spouse in a lesbian marriage, when the child was conceived using an anonymous sperm donor and was born to the other spouse during the marriage. Thus, the language in section 144.13(2) limiting the requirement to “the name of the husband” on the birth certificate is unconstitutional as applied to married lesbian couples who have a child born to them during marriage.

Camilla Taylor, an attorney for Lambda Legal, noted the importance of the Iowa decision for same-sex couples.

Hundreds of same-sex couples in Iowa have been denied accurate birth certificates since 2009, Taylor said, and suffer a range of problems as a result of one of the spouses not being considered legal parents. They've had hassles enrolling their children in schools, taking them to the doctor and traveling, she said.

But Nancy cautions that the decision raises grave concerns for similar cases in the future.

Mackenzie Gartner gets a birth certificate naming both her moms. This is good news.

So why am I not celebrating? In other posts I have criticized this litigation because it helps only children whose moms are married. I stand by that criticism. The court’s opinion makes me more concerned than ever.

The court’s opinion, Polikoff continues, raises the issue of illegitimacy, an outdated criterion that the U.S. Supreme Court rejected as an issue more than 45 years ago.

The court says "we recognize the strong stigma accompanying illegitimacy." Look, everyone, and I mean this, is this what we want for our community? That the children of couples who don't marry be considered illegitimate?

But, says Polikoff, evoking the issue of illegitimacy is not the only area of concern. Rather the Iowa decision is a throw-back to an era when the concept of “paternity” referred strictly to fatherhood rather than being considered a gender-neutral term when applied to same-sex parents.

The court ruled that the statute requiring a husband's name to appear on a birth certificate should not be read in a gender neutral manner, that the legislature unambiguously intended to differentiate between the two sexes in its parentage presumption. Many states have gender specific language in its parentage laws. Those must be read in gender neutral ways. Here is just one example. Every state has a statute that paternity judgments must be given Full Faith and Credit by other states. Every state. Those statutes must be interpreted to apply to all parentage judgments, for both mothers and fathers. The reasoning of the Iowa court, whether they understood what they were doing or not, is going to help anyone arguing that the statute should apply only to fathers. That is the wrong result, and it will hurt many, many of our families.

In a nutshell, while the Iowa ruling was a win for the Gartners, it contains both positive and negative ramifications for future cases and in fact misrepresents case law. As is the case so often when it comes to marriage equality and LGBT rights in general, it’s one step forward, one (or more) steps back. To read Polikoff’s excellent commentary on this case, visit her blog at http://www.beyondstraightandgaymarriage.blogspot.com/.