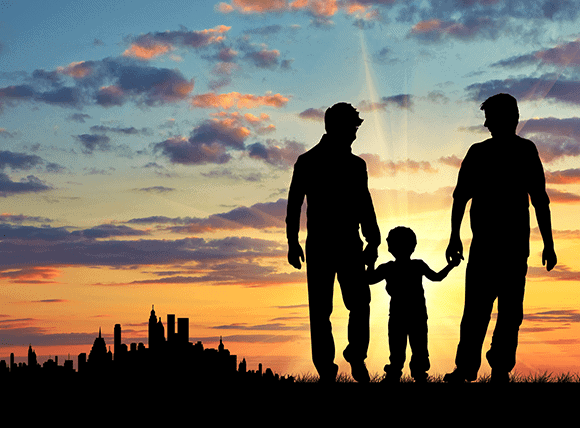 Ireland legalized same-sex marriage the same year the United States did, via a Supreme Court ruling in 2015. But just as is true of the U.S., Ireland has struggled to update its laws to ensure LGBT individuals are treated equally under laws governing citizenship and parentage.

Jay O’Callaghan and Aaron O’Bryan, a gay couple, both hold Irish passports but are permanent residents of Canada. Their son was born in Toronto via egg donation and surrogacy, and the dads want him to hold dual citizenship. But when they applied for an Irish passport for their son, they ran into a wall.

Even though same-sex couples may legally marry in Ireland, the country’s Children and Family Relationships Bill does not cover donor-assisted reproduction for all same-sex families, according to a CTV News report.

Under Irish law, the mother of a child is the person who gives birth to the child, or a female adopter. Meaning, if O’Callaghan and O’Bryan were a male-female couple, they would have no trouble getting Jake an Irish passport.

After a six-month delay, the Irish government notified O’Callaghan and O’Bryan they would have to apply for a declaration of parentage, requiring them to appear before an Irish court and produce DNA evidence of their son’s parentage, Pink News reported, a time-consuming and costly process.

The hitch was, having their baby’s DNA tested was never something O’Callaghan and O’Bryan wanted to do. Like many gay couples who become fathers via egg donation and IVF, both partners submitted sperm to be used in the fertilization process; they do not know which of them is the biological father of their son, and they do not want to know.

As a father of twin boys conceived, with my spouse, via egg donation and IVF, I sympathize with these dads’ dilemma. Like them, Tommy and I never have undergone DNA testing to determine the biological parentage of our boys, and we have no intention of doing so. They are our sons, we are a family, and no genetic test can change that fact.

Unfortunately, if the couple pursue their aim of obtaining dual Canadian-Irish citizenship for their son, they will not be allowed that choice. Under Irish law, the Toronto surrogate and her partner or spouse are considered the parents—even though neither is genetically related to the child. To establish their son’s Irish citizenship, either O’Callaghan or O’Bryan must prove he is the child’s genetic father.

This family’s ordeal in establishing citizenship and parentage in Ireland mirrors the experience of many LGBT parents here in the United States, where laws in many states have not yet caught up to rapid advances in assisted reproductive technology, let alone the new realities of legal same-sex marriage. As we discussed earlier this month, some three years after the U.S. Supreme Court’s 2015 Obergefell v Hodges decision legalizing same-sex marriage in all 50 states, some LGBT intended parents feel surprised and betrayed to learn that, in order to legally protect their families, they must still, in many cases, adopt their own children conceived via IVF and surrogacy.

Yet laws governing adoption, parentage, inheritance, assisted reproduction and reproductive rights have always differed from state to state, with some jurisdictions markedly more restrictive, often posing a minefield, even for married, heterosexual intended parents. Legislation and case law have always lagged behind the societal changes made possible by advanced technology. That is why my firm, International Fertility Law Group, has a network of U.S. and international family law, estate planning and reproductive law attorneys, experienced and current on the law in their local jurisdictions, as a cornerstone of our service to clients.

O’Callaghan and O’Bryan are using the attention their story has generated to spur positive changes in Irish law. We at IFLG applaud their courage and determination to create something good out of a negative experience. But we also urge other LGBT couples and intended parents to become familiar with and consider carefully the laws where your surrogate will give birth, the laws in the country or countries where you wish to register your child’s citizenship, and the laws where you and your family plan to reside, before entering into a surrogacy arrangement. Any attorney experienced in fertility law will want the answers to those questions, so that he or she can guide you in making the best decisions for your family, or to avoid the kind of heart-breaking surprise that this couple experienced.