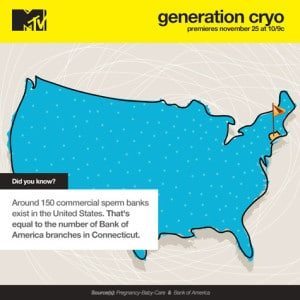 “Who’s Your Daddy?” the first in the six-episode MTV docu-series, “Generation Cryo,” premiered Nov. 25 at 10 p.m. Pacific Time. The second episode, “Come To Grips,” will air next Monday, Dec. 2. The series examines issues facing a generation of youth who were conceived via anonymous sperm donors through the eyes of Breeanna. The 17-year-old logs onto the Donor Sibling Registry, a website that helps offspring conceived via sperm donation connect with their family members, only to learn she has at least 15 half-siblings fathered by anonymous donor #1096.

Thanks to recent advancements in assisted reproductive technology, Breeanna and others like her are breaking new ground, as it becomes increasingly common for families to be formed via sperm donation, egg donation and surrogacy. Although many donors choose to remain anonymous, growing numbers of donors are voluntarily offering to be identified. There is no blueprint for the resulting societal and interpersonal dynamics. Breeanna’s story will no doubt remind all of us of the importance of taking human emotions into consideration as we navigate this unfamiliar new terrain. For more information and to test your knowledge about sperm donation, visit http://remotecontrol.mtv.com/2013/11/20/generation-cryo-sperm-donation-facts/.