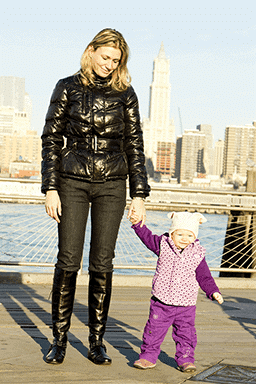 In the Baby M case, surrogate Mary Beth Whitehead contracted with a married couple, William and Elizabeth Stern, to conceive and bear a child for them, using William Stern’s sperm and her own egg—otherwise known as “traditional surrogacy.” In March 1986, Whitehead gave birth to a baby girl and, three days later, surrendered the child to the Sterns. Less than 24 hours later, however, Whitehead underwent a change of heart, went to their home and took the baby back, threatening suicide. Whitehead refused to return the child, at one point fleeing with her family to Florida. In July, a private detective was finally able to return the child to the Sterns. A New Jersey Superior Court took up the case in January 1987.

At the time, surrogacy and other forms of assisted reproductive technology were in their infancy. The first baby was born via in vitro fertilization, commonly referred to as the world’s first “test-tube baby,” in 1978. In 1986, traditional surrogacy, in which the surrogate is biologically related to the child, was more common. Today, thanks to the evolution of new technologies and best practices, nearly all surrogate births occur via “gestational surrogacy,” in which both egg and sperm are provided either by an intended parent or a (usually anonymous) donor; in other words, the surrogate is not biologically related to the child.

But in 1987, Whitehead’s desire to keep the baby garnered a certain amount of public sympathy, and the lurid headlines from the case dominated the news for months. Surrogacy was controversial, raising ethical concerns about potential exploitation of women and “baby selling.” There was little data available on the benefits or dangers of surrogacy. Jurisdictions throughout the country looked on warily, and many policy-makers concluded that sanctioning such radical new forms of family creation was not in the public interest.

Times have changed. Today, with newer technology, improved outcomes, increased accessibility and expanded public acceptance, many infertile couples, same-sex couples and single individuals look at IVF and surrogacy as viable options. States such as New York are under pressure from constituents, who are forced to endure out-of-state travel and higher costs in order to have a child via surrogacy.

New York Governor Mario Cuomo established his state’s Task Force, which includes attorneys, medical professionals, religious leaders and public officials, in 1984. During the Baby M backlash of 1987, Cuomo assigned the Task Force to examine the issues surrounding surrogacy. In 1988 it issued its recommendation to outlaw compensated surrogacy, stating ““society can conclude that the potential or likely risks of a practice outweigh the benefits conferred without awaiting broad-scale social experimentation.” Altruistic surrogacy, in which the surrogate is not compensated for time or inconvenience, remained legal in the state.

In its December report, the Task Force points out that “the impact of surrogacy is no longer speculative,” and its work is informed by a growing body of research. In 1988, the Task Force concluded that surrogacy was likely to lead to children being treated as commodities; today research has shown that children are not harmed by surrogacy, nor are a surrogate’s biologically related children harmed by having their mother serve as a surrogate. “Research has revealed that children born through surrogacy and other ART practices are extremely desired children and are being raised by highly committed and loving parents.”

The report also revisited the Task Force’s earlier concerns that paid surrogacy would commercialize reproduction and demean women, which the ensuing decades proved unwarranted. Under industry best practices, agencies do not contract with surrogates who are financially distressed and usually require that surrogates have at least one living child of their own. Four decades worth of research and data also ensures that women are fully informed before then enter a surrogacy arrangement. As the report explains:

For many women, reproductive freedom is wedded to the promise of human dignity, self-determination and equality. While access to health services and reproductive technology are among the most highly contested aspects of reproductive freedom, the right to make free and informed decisions regarding whether to access these resources has also come to inform notions of womanhood. A key component of reproductive freedom is the availability of options. Surrogacy is one option. Although few women will choose to become gestational surrogates, most women value autonomy and the option to decide whether being a surrogate fits into their values, beliefs, and life choices. Research indicates surrogates are empowered by their surrogacy experiences because it provides benefits to them personally and their families.

In perhaps the most striking acknowledgement of how attitudes have changed, the Task Force referred to its 1988 conclusion that surrogacy should be discouraged “because the practice devalues families and fragments parenthood,” acknowledging that, today, “modern families can be constituted in many configurations, as evidenced by the recent federal legalization of same-sex marriage.”

The change in perception was not unanimous on the Task Force. In a Minority Report, seven members rebut the majority recommendations, recommending instead that all forms of surrogacy, “both genetic and non-genetic, compensated and uncompensated, should still be discouraged.” Non-compensated surrogacy should be “tolerated.” The Minority Report also recommends that an age cap for intended parents, raises concerns that intended parents “who think they do not have time for pregnancy” will not be good parents and weighs in disapprovingly on LGBT and single parents.

But you can’t turn back the clock. Under current law, when a baby is born via altruistic (unpaid) surrogacy in New York, the surrogate is listed as “mother” on the baby’s birth certificate. A female intended parent, even if she is genetically related to the baby, must adopt her own baby or obtain a court order to change the birth certificate. The Task Force majority recommendations include allowing intended parents to establish parental rights prior to implantation of the embryo, which would place both intended parents’ names on the birth certificate and allow them to avoid post-birth adoption proceedings—and the attendant expense.

The Task Force report also recommends allowing gestational surrogacy agreements, to include compensation for the surrogate, as long as they comply with the protections outlined in the report.

Although it is not yet law, the Task Force report signals a sea change in New York, where State Sen. Brad Hoylman (D-Manhattan), who along with his husband David Sigal, has two children born to out-of-state surrogates—has been pushing to legalize compensated surrogacy since 2012. ““I think it is a major step forward for our efforts to legalize commercial surrogacy agreements,” Hoylman told the Daily News earlier this month.

Although lawmakers hope to readdress the bill this session, the New York Senate is under Republican control, and the outcome remains uncertain. The Task Force report, despite the division, is a strong indication that the state may be ready for a change.

Meanwhile, this summer the New Jersey State Senate passed legislation to legalize compensated surrogacy agreements Governor Chris Christy has twice vetoed similar legislation. Will the third time be the charm? And will Michigan, where entering into a surrogacy agreement will get you a fine of up to $10,000 or a year in jail, catch the winds of change. Thirty years, since one surrogate’s change of heart cast a dark shadow on all surrogacy, is long enough to wait.