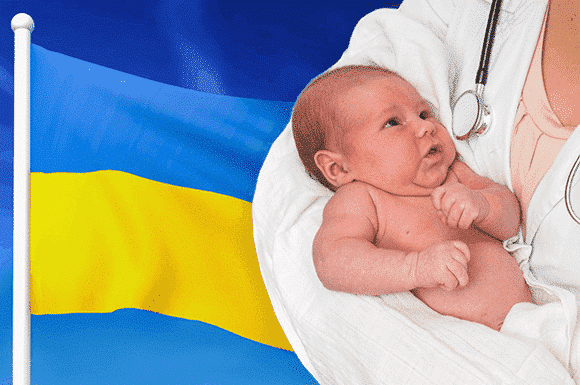 As some parts of the world take halting steps to resume daily life in the face of COVID-19, a tragedy has unfolded in Ukraine, where dozens of babies born to surrogates there remain stranded, separated by travel bans from their intended parents thousands of miles away.

As reported by the BBC, after bureaucratic crackdowns in many East Asia surrogacy hubs in recent years, Ukraine became a popular destination for intended parents with promises of low-cost surrogacy—despite the fact that same-sex intended parents cannot become legal parents through surrogacy in the Ukraine, the lack of court ordered legal protections, and the absence of nationality-status at birth for children born there. In vitro fertilization and surrogacy in Ukraine is said to cost between $30,000 to $50,000, compared to two or three times that in the United States, BBC reports.

Ukraine is one of numerous countries that have closed borders to international visitors in response to the COVID-19 outbreak. Since Ukraine closed its border in March, only fifteen intended parents awaiting surrogate births have been allowed to enter the country on special permits; however, obtaining those special permits, CNN reports, has become a “bureaucratic nightmare.”

CNN reported recently on an American dad who was able to make it to Ukraine in time for the birth of his son but is now stranded there while his wife waits at home to meet her newborn for the first time.

“We found a way, and we were lucky, but others were not so lucky,” Michelle Leineke told CNN of the scores of parents whose babies have been left in the care of strangers.

There is no official count of the number of babies born in Ukraine each year. CNN reports official estimates of approximately 100 stranded surrogacy babies in the country currently, but with many pregnancies already in progress, that number is expected to reach a thousand.

According to the BBC report, 16 families from Argentina whose babies have been born or will soon be born are negotiating with Ukrainian authorities to obtain special permits. One couple, whose baby was born seven weeks ago, agonizes over their inability to bond with their son. If and when they succeed in getting travel permits, they will have another problem to contend with: Argentina has suspended all commercial flights into the country through September.

The reports from Ukraine, the video of rows of babies cared for by ranks of uniformed nurses, is heartbreaking. Every country in the world is in crisis at one level or another right now and struggling to implement policies and practices to protect the lives of their citizens. As we have reported, our IFLG team has succeeded in helping intended parents from all over the world get to the U.S. to attend their babies’ births, typically by going through the U.S. Embassies and Consulates in the parents’ home country to obtain special exemptions allowing travel to the US during the travel ban.

For intended parents undergoing surrogacy in Ukraine the situation is even more difficult. Emergency scenarios like this may require the official cooperation of both governments, and intended parents should work with their attorneys in their home country and in Ukraine in petitioning the government.

In helping international intended parents travel to the U.S., we have been successful in arguing that it is in the national interest of the United States that the intended parents be present to take responsibility for the infant rather than expending healthcare resources, already overburdened by the COVID-19 emergency, on the baby’s care. The same type of national interest argument might be effective in winning a waiver of the Ukraine travel ban.

Every day we learn more about the dangers of COVID-19 and about how the pandemic is impacting every facet of human life. In the space of a few weeks, the carefully made plans of intended parents, the months or years of screenings and procedures, the thousands of dollars of treatment costs, were all suddenly put at risk by a virus.

Here in the United States, the surrogacy community—physicians, surrogacy agencies, attorneys, advocacy organizations—responded to the COVID-19 crisis by sharing best practices, information and resources to help mitigate the impact on intended parents, surrogates and donors. (For our archive of information on COVID-19 and its impact on assisted reproductive technology, click here.)

Our hearts are with all whose lives have been disrupted, particularly those new parents who are separated from their babies in other countries. While the numbers of people in this situation are relatively small in the global expanse of the pandemic, the pain and desperation of these parents is monumental. We urge the governments of the world to have compassion for this small segment of families, find a way to unite them with their babies and help them get them safely home.