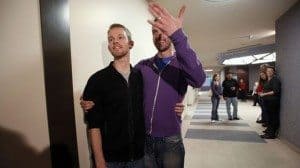 In its June 2013 rulings striking down the U.S. Defense of Marriage Act (DOMA) and invalidating California’s Proposition 8 anti-gay marriage initiative, the U.S. Supreme Court nevertheless carefully avoided broadening the scope of its decisions to infringe upon states’ rights in regard to marriage laws, with justices undoubtedly hoping change would be implemented in state legislatures. As a result, while same-sex marriages are now legally recognized at the federal level, recognition under state law varies from state to state.

Now, defenders of Utah’s gay marriage ban seem likely to force the U.S. Supreme Court to weigh in again on same-sex marriage, sooner rather than later.

Following a Dec. 20 ruling striking down Utah’s gay marriage ban on the grounds it was unconstitutional, a federal appeals court issued a Christmas Eve refusal to stay same-sex marriages—in other words, temporarily halt them—during what could be a lengthy appeals process. Stymied in its efforts to prevent what it claims may be legally invalid marriages, the Utah Attorney General’s Office on Dec. 26 vowed to take its request for a stay to the U.S. Supreme Court, possibly as early as the following day, according to CNN.

In a two-page order, a two-judge motions panel of the Tenth Circuit found that a stay was not warranted, expressing some uncertainty that the state’s position against same-sex marriage would ultimately prevail in court.  The judges set the case (Kitchen v. Herbert (Circuit docket 13-4178)) for expedited review, with a briefing schedule to be issued shortly.

The request to delay U.S. District Judge Robert J. Shelby’s Dec. 20 ruling legalized same-marriage in Utah would initially land on the desk of Justice Sonia Sotomayor, who is Circuit Justice for the geographic jurisdiction that includes Utah. Sotomayor would have the discretion to rule on her own or refer the request for stay to the full court. In his decision, Shelby cited a similar argument to that used by the Supreme Court to overturn DOMA  in June. Shelby’s ruling states that Utah’s constitutional amendment prohibiting same-sex marriage, approved by Utah voters in 2004, violates gay and lesbian couples' rights to due process and equal protection under the 14th Amendment, as reported by Politico.

Utah same-sex couples rushed to local county clerks’ offices all over the state as soon as Shelby’s ruling came down last week. Some counties began issuing marriage licenses to same-sex couples immediately; others, citing concern that the federal ruling conflicted with Utah law, refused to do so pending further legal clarification. The last four county “hold-outs”—Box Elder, Utah, Piute and San Juan counties—acquiesced to the ruling on Dec. 26, according to an Associated Press report.

San Juan County Clerk Norman Johnson said “what finalized it for me” was Gov. Gary Herbert’s order to state agencies to comply with Shelby’s decision and change procedures for the delivery of state services. To that end, the Utah Department of Workforce Services is recognizing gay couples for food stamp and welfare benefits.

Initially, Herbert, a conservative Republican, had advised counties to seek advice of their county attorneys. Under Utah law it is a misdemeanor offense for a county clerk to issue a marriage license to a same sex couple.

As Denniston surmises in SCOTUSblog, the Utah stand-off could force the Supreme Court to decide whether states have the right to determine who is allowed to marry or whether the larger issue of the civil rights of gay and lesbian people to marry whom they choose must be guaranteed at the federal level. It was inevitable that the high court would have to weigh in eventually, as it did decades ago in regard to interracial marriage. In their carefully limited June rulings, the justices were likely only playing for time for societal norms and human decency to move state laws in the right direction. Now it looks like time may be up.