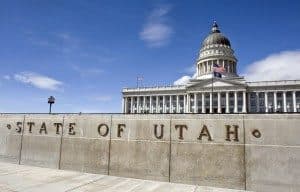 The people of Utah are divided between celebration and outrage in response to a federal court ruling Friday, Dec. 20, knocking down Utah’s ban on same-sex marriage on constitutional grounds. As word of Friday’s ruling by U.S. District Judge Robert J. Shelby spread, gay and lesbian couples in Salt Lake City and across the state rushed to their county clerk’s offices to apply for marriage licenses, many with family members and witnesses in tow getting married on the spot. There was a clear sense among those rushing to the courthouses that a stay on gay marriages could come down at any time.

On Sunday, a federal appeals court in Denver refused to rule on the Utah attorney general’s request for an emergency stay, insisting that Shelby rule on the motion first. Today Shelby refused to overturn his own ruling, and the state took its motion back to the 10th U.S. Circuit Court of appeals, which gave lawyers representing the pro-equality side until end of day to respond. “Acting Attorney General Brian Tarbet said the state would consider going to the Supreme Court if the appeals court doesn't grant a stay,” reported NBC News. If a stay is granted, same-sex marriages would be halted pending either the upholding or overturning of Shelby’s ruling.

Even with a stay, many couples were unable to get licenses from their local counties. Utah’s Republican Governor Gary Herbert, who has called Shelby an “activist” judge, advised county clerks to check with their county attorneys before beginning to issue marriage licenses to same-sex couples. Herbert and the state’s Attorney General’s office stated that Shelby’s ruling and subsequent refusal to issue a stay has created “chaos” in which some couples who were allowed to marry immediately may see their marriages invalidated if the ruling is overturned. “But legal experts say that even if a stay is granted, the licenses that have already been issued will likely still be valid,” NBC News reported.

As Californians know all too well from the Proposition 8 campaign of 2008, the right to marry can be won, then lost on a public vote, sometimes for years. We hope the LGBT community in Utah, and their supporters, will not suffer that kind of heartbreak and frustration. As we wrote a year ago, Utah’s laws impacting the rights of gay and lesbian couples to form families are already among the most onerous in the United States: gay and lesbian couples are prohibited from adopting children; and only married, heterosexual couples are allowed to become parents via surrogacy. Even legal, heterosexual surrogacy arrangements are tightly restricted: only gestational surrogacy, in which an embryo is implanted into the surrogate, is allowed, and genetic material from at least one of the intended parents must be used for fertilization of the embryo. Gaining the right for same-sex couples to marry won’t immediately change those Utah laws. But it could be a first step toward the public acceptance that families come in all different sizes and shapes, and that all children are equally deserving of security and equal protection under the law.