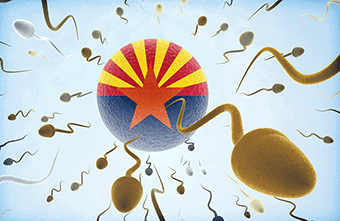 Under a new Arizona law, in divorce cases involving frozen embryos, courts are mandated to award custody of the embryos to the “spouse who intends to allow the in vitro human embryos to develop to birth”—even in the face of an existing disposition agreement. As we reported earlier this year, this ill-conceived law puts the possibility that an unborn, frozen embryo might survive and be born over an individual’s right to decline to reproduce.

In an article this week, in which I was quoted, The Washington Post warns of the broader implications of the law:

The legislation could dramatically alter the practice of fertility medicine, as well as the debate over when life begins. It is already fueling an argument by some conservative groups that frozen embryos are not mere tissue over which people may exercise ownership rights but human beings who should be accorded rights of their own….

The Arizona law, SB 1393, was introduced by anti-choice State Senator Nancy Barto (R-Phoenix) in reaction to a notorious 2014 case in which an Arizona cancer patient, Ruby Torres, petitioned to use cryopreserved, or frozen, embryos against the wishes of her husband, arguing they may represent her only chance to have a biologically related child. Ultimately, the court ruled against her, upholding the husband’s right not to reproduce. But rather than ordering the embryos destroyed, the judged ordered them to be donated to a fertility bank or to another couple. Torres is currently appealing the ruling.

The case received extensive media coverage, became a cause célèbre for anti-choice organizations, and fueled the right-leaning Arizona state legislature’s determination to strip judges of the ability to make case-by-case decisions in the best interests of all parties.

As I told The Washington Post, the Arizona law is critically flawed and opens a front for anti-choice legislators intent on establishing the legal “personhood” of unborn embryos, trampling on basic reproductive rights in the process. If allowed to stand, Arizona’s new law means intended parents with unused frozen embryos can no longer assume their wishes—even if documented in a legal agreement—will be carried out. It may also offer a shiny new model for more conservative states to follow.