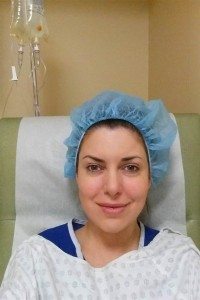 15 Aug Bobbie Thomas Brings Her IVF Experience to the BUZZ

Growing societal acceptance of in vitro fertilization (IVF) and other forms of assisted reproductive technology has resulted, in part, from efforts by medical professionals, advocacy organizations and the media, including TV and film creators, to bring visibility to the issue. The more we know about ART and the families who are helped by it, the more comfortable with the topic we all become. But nothing speaks to individuals as powerfully as the shared experience of another human being, and that is what Today Style Editor Bobbie Thomas is contributing to the conversation.

Thomas, 39, and husband Michael Marion, an attorney, realized soon after their May 2013 marriage that the best opportunity for them to become parents would be IVF. Thomas underwent an initial round of treatment in May, which was unsuccessful. Upon undertaking the second round earlier this summer, Thomas made the decision to use her highly visible Today Show podium as a way to get the topic out in the open and potentially make others undergoing fertility treatment feel more comfortable and less alone in the process. She first disclosed her situation to her Facebook followers. “When I posted to my Facebook page that I was not pregnant, but was hoping to become so with the help of IVF, I was astounded by the outpouring of love and encouragement from people who I’ve never even met,” she wrote later.

On a special segment of the Today Show, Thomas told co-anchors Kathie Lee Gifford and Hota Kotb: “I have to say the biggest reason I wanted to really talk about this is because it’s hard enough, as you see, to go through, but to make something a secret—I saw myself whispering here in the hallways, and so many women were going through it.”

Even in the U.S., where IVF, surrogacy, egg and sperm donation and other ART procedures have become relatively common, and many legal protections are in place, people going through the experience often feel stigmatized, even shamed or embarrassed. Those feelings are a cultural phenomenon, and not a benign one. All too often, stigma, shame and societal disapproval, in the U.S. and other parts of the world, obstruct the development of good laws and public policies that would make assisted reproductive technology more accessible, safer and more legally secure for millions of intended parents and their families. Kudos to Bobbie Thomas for having the courage and generosity of spirit to use her spotlight to shed light on her very human condition.