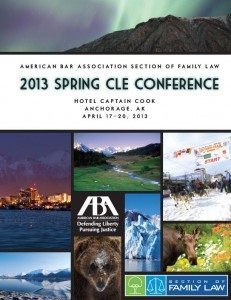 The conference session topics were all interesting and exciting, but of particular interest to me were the ones concerning ethical issues. One of the sessions, Infant Adoptions and ICWA: Preserving Heritage or Harming Children?, dealt with the application of the federal Indian Child Welfare Act (ICWA) in regard to infant adoptions. In another, Raegen Rasnic, Esq., Chief Ted Strong and Ronna Washines discussed How Would a Tribal Court Approach an ART Controversy?

The ICWA was enacted in the late 1970s primarily to protect against the involuntary removal by child welfare authorities of children from Indian families for placement in non-Indian homes. The act gives tribes broad jurisdiction over “certain legal proceedings involving Indian children, including adoption, termination of parental rights, and child dependency cases.”

Although the passage of ICWA contains no mention of ART methods of family formation, as Rasnic wrote in an accompanying paper, “an internet search quickly reveals that egg and sperm donor programs currently tout the availability of ‘Native American’ or ‘American Indian’ donors, and that some prospective parents deliberately select such donors out of a desire to have children who are eligible for tribal membership.”

These discussions are particularly interesting in light of a case heard by the U.S. Supreme Court earlier this month, on April 16, concerning a non-Indian birth mother who is seeking to place her  child for adoption with a non-Indian South Carolina couple. The child’s biological father, a member of the Cherokee Nation, objects to the proposed adoption, saying he wants to raise the child. Because the father did not live with the mother and child prior to the child’s placement for adoption and did not provide financial support for the child during pregnancy or after, South Carolina law does not require his consent to the adoption. But because the father is Cherokee, the Supreme Court is being asked to decide whether the father is required to meet the criteria of the state law or whether ICWA invalidates that requirement in this case.

There are a number of factors on both sides of this issue: The father abdicated his parental rights to the mother and stated his refusal to pay child support via a text message and made no attempt to be part of the child’s life until he learned she had been placed for adoption. The adoptive parents removed the child from the state without disclosing that the child was of Indian heritage. The Cherokee Nation originally reported the father was not a tribe member because an incorrect spelling of name and incorrect birth date were initially submitted.

My colleague Nancy Polikoff, who has more than 35 years of experience with gay and lesbian family law issues, has written a thorough, thoughtful analysis of the case on her blog, Beyond (Straight and Gay) Marriage. She writes: “a minority of courts have narrowed the scope of ICWA to find that it only applies to a child already living in an existing Indian family (which this child obviously was not). The adoptive parents in this case are asking the Supreme Court to interpret ICWA in that narrow way. That would be wrong.”

The fact that this case is currently before the Court made for a lively and fascinating discussion—a perfect example of the excellent content and opportunities for expanding horizons this conference unfailingly provides.