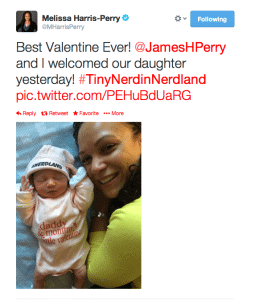 Earlier this year, popular MSNBC host Melissa Harris-Perry put a very public face on assisted reproductive technology with the announcement that she and husband James Perry were new parents of a baby girl. The birth news came as a surprise to Harris-Perry’s audience and sparked lots of commentary, in part because, with a baby born via IVF and surrogacy, she was never visibly pregnant.

As Harris-Perry explains in her blog post, “How We Made Our Miracle,” after giving birth at age 28 to her daughter from a previous marriage, Parker, Harris-Perry suffered through many years with painful uterine fibrosis until finally, in 2008, having a hysterectomy. Just months later, she met her husband James, and the two married in 2010.

The couple wanted their own biological children, and in 2012, began the process of IVF with a gestational carrier. Because Harris-Perry had retained her ovaries, she was able to use her own eggs to conceive. On Valentine’s Day 2014, her and James’ daughter was born. She writes:

My pregnancy with my first daughter was blessedly uneventful; this one, however, was indeed an event. It took two families, three states, four doctors, and five attorneys to get this little girl here. And while our gestational carrier has no genetic tie to our little one, she is now our family.

One unintended but positive consequence of Harris-Perry’s high-profile birth experience was the positive visibility it generated within the African American community. Historically black women have been less likely to seek treatment for infertility than white women, according to Dr. David Seifer, writing for the American Society for Reproductive Medicine (ASRM).

The numbers rose again in 2004-2006, according to a study published in ASRM’s Fertility and Sterility Journal. “However, black women still remained underrepresented in proportion to the number of women of reproductive age who may have had infertility and may have benefited from ART during this study period.”

Cost may be one source of the disparity. However, “even in states with mandated insurance coverage, the individuals who access IVF services tend to be predominantly Caucasian, highly educated, and wealthy,”  Fertility and Sterility, Vol. 94, No.1, June 2010).

Cultural perceptions may also be a barrier, according to Regina Townsend, founder and executive director of The Broken Brown Egg Inc. While undergoing infertility treatment, Townsend started Broken Brown Egg as a blog that later grew into an advocacy organization with a mission to “put a brown face” on the issue of infertility for women.

Infertility draws no distinction between gender, ethnicity, religion or heritage. Yet community mores, culture, religious beliefs and the stigma of infertility sometimes create insurmountable barriers to people longing to become parents. Strong advocates such as Instant Mom author Nia Vardalos, recently honored by the American Fertility Association, and Melissa Harris-Perry, are much-needed voices for non-traditional family formation and the rights of everyone to benefit from the life-enhancing technology of ART.