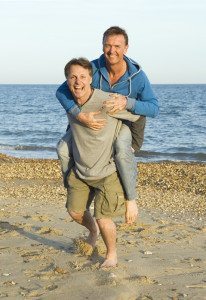 The celebrations continue, as Hawaii this week became the 15th U.S. state to legalize same-sex marriage, following close behind New Jersey as the 14th. The Illinois legislature approved same-sex marriage a week before the Hawaii vote; however, Governor has Pat Quinn has not yet signed the Illinois bill into law. He has said he will sign and is expected to do so later this month.

The Hawaiian state Senate on Nov. 12 passed SB1 on a 19-4 vote during a special session called by Gov. Neil Abercrombie, who signed the bill into law yesterday. The Hawaiian House approved the measure 30-19 on Nov. 8 after adding several amendments aimed at quelling religious objections.

Opponents of the measure were expected to file a motion asking for a temporary stay on SB1 pending a court ruling on a 1998 constitutional amendment that states: “The Legislature shall have the power to reserve marriage to opposite-sex couples.” Seventy percent of Hawaiian voters approved the amendment in 1998, as reported by The Los Angeles Times.

Many of us thought Hawaii would have approved same-sex marriage long before now. After all, in 1993 a state Supreme Court decision put it at the vanguard of the marriage equality movement. As Reuters reports:

The state Supreme Court ruled in 1993 that barring same-sex marriage was discriminatory, in a landmark opinion that spurred the gay rights movement nationwide but sparked a backlash that until now kept matrimony restricted to heterosexual couples in Hawaii.

In recognizing the legal milestone of that 1993 decision, Abercrombie handed the pen he used to sign Wednesday's bill to former state Supreme Court Justice Steven Levinson, who wrote the opinion in the case known as Baehr vs. Lewin.

The decision was later trumped by enactment of a 1994 statutory ban on gay nuptials, followed by a voter-approved state constitutional amendment reserving for the legislature the power to define the institution of marriage.

It is the status of that voter-approved constitutional amendment that has given same-sex marriage opponents the means to prevent the law from taking effect, if only temporarily. A Hawaii state court judge denied a request to prevent the legislature from voting on SB1 but said he would “examine the constitutionality of the bill once it was enacted,” the L.A. Times reports.

Hawaii Attorney General David Louie issued an opinion in October saying that the 1998 constitutional amendment allows the legislature to reserve marriage for “one man and one woman” but does not prohibit lawmakers from passing a law legalizing same-sex marriage. Opponents insist that the new law conflicts with the constitutional amendment and with the will of the voters.

Because the U.S. Supreme Court in June ruled narrowly by affording federal recognition of same-sex marriage only in states where it is legal, this movement toward full equality for LGBT people will continue state-by-state until the inevitable happy ending. Every state where marriage equality is enacted into law adds to the body of evidence that social mores as well as hearts and minds have changed. Meantime, expect to see lots of Hawaiian beach weddings in the coming months.