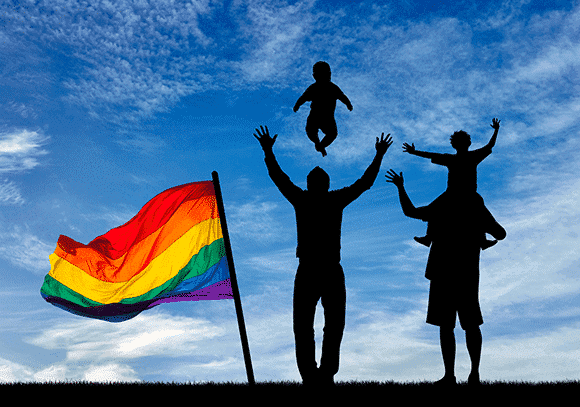 Amid so many gravely concerning headlines about immigration recently, at least one immigration story had a happy ending last week: A federal judge overturned the government’s earlier decision to deny U.S. citizenship to a twin boy born via IVF and surrogacy—while granting citizenship to his twin brother, born within minutes to the same surrogate.

As we wrote about this case last year, the original, surreal State Department ruling was based on the boys’ genetic relationships to their gay fathers.

According to a Chicago Tribune report, Elad and Andrew Dvash-Banks met 10 years ago in Israel, where Elad grew up. Unable to legally marry either in the U.S. or Israel at that time, the couple moved to Canada, where they were legally married in 2010. Their sons were born via egg donation and surrogacy in 2016, and both fathers’ names were listed on both their birth certificates. Although both fathers contributed sperm, and each was genetically related to one of the twin boys, they planned to keep the specifics secret.

But when the family took steps to move to Los Angeles, closer to Andrew’s family, they ran into a shocking obstacle at the U.S. Consulate: The dads were forced to undergo DNA testing in order to pursue U.S. citizenship for their boys. Aiden, who is genetically related to Andrew Dvash-Banks, an American citizen, was granted U.S. citizenship; Ethan, who is genetically related to Elan Dvash-Banks, an Israeli citizen, was forced to emigrate on a tourist visa—now expired. Two boys, born just a minute apart, from the same egg donor and surrogate, are viewed very differently by the U.S. government.

As we also reported at that time, “the most concerning thing about the denial of these two babies’ U.S. citizenship is that same-sex parents, even when legally married, are being treated differently than heterosexual married parents.”

Historically, State Department policy, for purposes of immigration and citizenship, has been to presume married heterosexual people are the legal parents of any child born during their union, with no proof of a genetic relationship between parents and child required. But the department treated same-sex married couples and their children via assisted reproduction differently, making citizenship contingent on the child’s biological relationship with a parent who is a citizen.

That discrepancy between how the State Department treated married heterosexual parents and how it treated LGBT parents was the basis of last week’s federal court ruling.

District Judge John F. Walter overturned the State Department’s decision denying citizenship to now 2-year-old Ethan Dvash-Bank’s, ruling that the child has been an American citizen from birth. As the New York Times reported, “the judge ruled that federal law does not require a child born to married parents to prove a biological relationship with both parents.”

The State Department reportedly is reviewing the ruling but did not respond to questions about what it would mean for the policy going forward.

Judge Walter’s decision reaffirms the principle, central to the best and most progressive fertility law, that intended parents—and not egg donors, sperm donors or surrogates—are the legal parents of children born via assisted reproductive technology, from the moment of conception. After all, no one gets pregnant accidentally using assisted reproduction… In fact, were it not for intended parents’ deliberate actions, perseverance and, usually, considerable expenditures, no children would be born via ART.

Since the U.S. Supreme Court decision legalizing same-sex marriage in 2015, state and federal laws, government rules and regulations have undergone, and continue to undergo, extensive changes to reflect the intent of that decision—everything from elimination of gender-specific terminology to changes in parentage and citizenship requirements for same-sex spouses, all hammered out law by law, case by case. Although this story is about two brothers with gay dads who won the same right to citizenship as their peers who were born to heterosexual parents, this happy ending portends equal treatment under the law for thousands of LGBTQ parents and families.