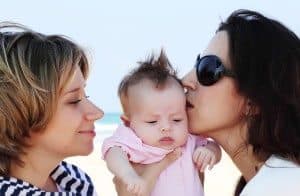 By the time Gov. Herbert pronounced same-sex marriages invalid, hundreds of Utah same-sex couples had already filed for spousal employee benefits, new driver’s licenses reflecting married names and other public benefits of legal marriage. Although no new benefits will be granted by the state, those already processed will not be invalidated, according to a New York Times report. Utah Attorney General Sean D. Reyes instructed county clerks to mail marriage certificates to same-sex couples who were married, to provide “ ‘proper documentation in states that recognize same-sex marriage,’ suggesting that the state government believes that the certificates it issued to same-sex couples may be considered valid by other jurisdictions,” The New York Times reported.

Meanwhile, with Holder’s announcement, the applications of married Utah same-sex couples for federal benefits, such as “health insurance for the families of federal employees and the ability to sponsor a noncitizen spouse for a family visa” will be recognized.

“I am confirming today that, for purposes of federal law, these marriages will be recognized as lawful and considered eligible for all relevant federal benefits on the same terms as other same-sex marriages,” Holder said. “These families should not be asked to endure uncertainty regarding their status as the litigation unfolds.”

The uncertainty about legal status is particularly troubling for Utah same-sex couples and intended parents. As we wrote earlier, Utah law prohibits unmarried couples from adopting children. During the brief period when same-sex marriages were legal in the state, some couples began the process of second-parent adoption. Surrogacy is also tightly restricted in Utah: only married, heterosexual couples may become parents via surrogacy; only gestational surrogacy, in which the surrogate is genetically unrelated to the child, is allowed; the intended mother must prove she is unable to carry the child; and genetic material from at least one of the intended parents must be used in creating the embryo. So the short-lived legalization of same-sex marriage opened up an avenue for Utah gay couples to create families previously closed to them.

A number of attorneys and law school professors are analyzing the status of Utah’s married same-sex couples and conjecturing about how things will play out. One of them, Salt Lake City attorney Zaven A. Sargsian, an associate attorney at Shumway Van & Hansen, listed a number of legal questions raised by the couples’ situation for the Salt Lake Tribute.

As Sargsian points out, the section of statute that was overturned by Shelby’s Dec. 20 ruling, Section 30-1-2, states that same-sex marriages are “prohibited and declared void.”

In other words, if Section 30-1-2 only said that marriages between persons of the same sex are “prohibited,” then it would be clearer going forward, after the Supreme Court’s stay, that no more marriages of same-sex couples will be performed, but that the ones already performed are valid.

Here, however, the language says that they are “prohibited and declared void”; the latter language roughly means “to have no legal force or validity.” This would suggest that the state can attempt to invalidate the marriages that have already been performed.

However, even if the marriages are eventually ruled invalid, Sargsian continues, many questions remain about how the invalidation would be carried out.

Does invalidating the marriages open a can of constitutional worms (like deprivation of a life or liberty interest without due process), and, as a corollary, more lawsuits?

Sadly, it is those married couples and their families that will suffer most from their uncertain legal status. The U.S. Supreme Court has the power to make the determination once and all, for all U.S. same-sex couples. How quickly they will do so is the burning question of the day.