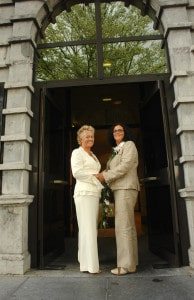 Another domino fell last week as another federal judge struck down a same-sex marriage ban in another conservative state—the second such occurrence in less than 30 days.

As reported by The Oklahoman:

After dissecting the arguments supporters voiced to justify the ban, Kern said that “moral disapproval of homosexuals as a class, or same-sex marriage as a practice, is not a permissible justification.”

Moreover, he said, protecting the sanctity of marriage wasn't a valid reason for the ban, given Oklahoma's high divorce rate of opposite-sex couples, and encouraging procreation wasn't logical either since opposite-sex couples aren't required to say they'll produce offspring in order to get a marriage license.

“Equal protection is at the very heart of our legal system and central to our consent to be governed,” Kern said in his 68-page decision.

“It is not a scarce commodity to be meted out begrudgingly or in short portions. Therefore, the majority view in Oklahoma must give way to individual constitutional rights.”

In his ruling, Kern said that the Oklahoma Constitutional Amendment passed by voters in 2004 that restricts marriage to “one man and one woman” “violates the Equal Protection Clause of the Fourteenth Amendment to the U.S. Constitution by precluding same-sex couples from receiving an Oklahoma marriage license.”

Supreme Court law now prohibits states from passing laws that are born of animosity against homosexuals, extends constitutional protection to the moral and sexual choices of homosexuals, and prohibits the federal government from treating opposite-sex marriages and same-sex marriages differently. There is no precise legal label for what has occurred in Supreme Court jurisprudence beginning with Romer in 1996 and culminating in Windsor in 2013, but this Court knows a rhetorical shift when it sees one.

In the Utah case, Shelby refused calls to stay his decision pending legal appeals, allowing some 1,300 same-sex couples to tie the knot before the U.S. Supreme Court finally called a halt to give the case a chance to work its way through the lower courts. Kern, in contrast, immediately put a stay on his Oklahoma ruling pending appeals, preventing same-marriages from beginning immediately in that state.

Oklahoma is in the same federal circuit as Utah, and [Norman attorney Don] Holladay, [who took over the case several years ago,] said he hopes the two cases are combined. The U.S. Supreme Court last week put gay marriages on hold in Utah while the appeals court hears the case, but U.S. Attorney General Eric Holder said the marriages that already had occurred would be recognized by the federal government.

As reported in the gay news blog, Towleroad, a suit challenging Oklahoma’s same-sex marriage ban has been on the books since 2004. Towleroad reported in August 2013 that the case had resurfaced again in the aftermath of the U.S. Supreme Court’s ruling overturning the federal Defense of Marriage Act (DOMA).

A 2004 challenge to the state's ban on same-sex marriage has been in a holding pattern for over a year while the federal court in Tulsa waited for the outcome of several high profile gay marriage cases including Hollingsworth v. Perry and United States v. Windsor. The couples who first brought the suit, Mary Bishop and Sharon Baldwin and Susan Barton and Gay Phillips, are challenging not only Oklahoma's ban on same-sex marriage but also a crucial part of DOMA not addressed in the Supreme Court's recent landmark ruling, the section that "allows states not to recognize gay marriages performed in other states."

In his Jan. 14 ruling, Kern writes of the original plaintiffs:

The Bishop couple has been in a loving, committed relationships for many years. They own property together, wish to retire together, wish to make medical decisions for one another, and wish to be recognized as a married couple with all its attendant rights and responsibilities. Part A of the Oklahoma Constitutional Amendment excludes the Bishop couple, and all otherwise eligible same sex couples, from this privilege without a legally sufficient justification.

In April 2013, the Oklahoma House of Representatives approved a resolution reaffirming the state’s ban on same-sex marriage and supporting DOMA. The resolution passed on an 84-0 vote, but only after the House Democratic Leader and more than half of the 29 House Democrats walked out, refusing to vote, according to local news reports.

The Oklahoma decision is another case in which judicial rulings have made clear that the majority view must give way to individual constitutional rights, just as occurred during the period when federal Civil Rights legislation enforced the racial integration of the South. Adjudicating equality for LGBT people, and equal legal protections for their families, is the right thing to do, and it is this same basic principle of basic individual and inalienable rights that this country was founded on. Quite simply, equality is on the right side of justice.