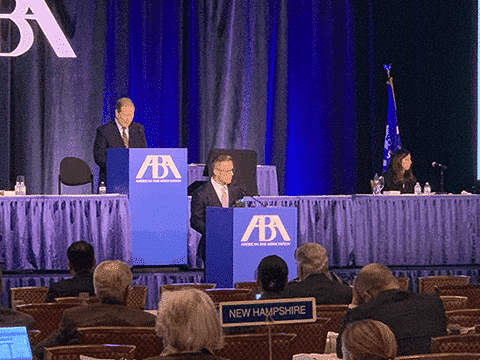 I’ve spent the past few days at the American Bar Association’s Midyear Meeting in sunny Las Vegas. It is always an honor and privilege to represent the ABA Assisted Reproduction Technology Committee (ART) and the Family Law Section in front of the ABA’s House of Delegates, which voted today to ratify the Model Act Governing Assisted Reproduction 2019.

The 2019 Model Act represents a dramatic and important modernization of the 2008 version and will serve as a guide for lawmakers in the ever-increasing number of states seeking to pass laws governing assisted reproduction.

As immediate past chair of the ART Committee, I am well aware of the long path to reach this point, paved with tireless effort and shared wisdom of some of the best minds in this field of law.

Back in the early 1990s, colleague Steven Snyder, my predecessor as chair of the ART Committee, and Charlie Kindregan (predecessor to Steve’s chairmanship) saw the need for aspirational model legislation governing assisted reproduction. Together, we worked tirelessly on the ABA Model Act Governing Assisted Reproductive Technologies, which was passed by the ABA in 2008. Later, as Steven’s successor, I was privileged to work with many outstanding attorneys and advocates from our committee and other organizations to update the 2008 Model Act. Among those who were instrumental in drafting the act were the ABA Science and Technology Section and the ABA Commission on Sexual Orientation and Gender Identity, both co-sponsors, as well the ABA Health Law and Real Property Trusts and Estates sections, the National Center for Lesbian Rights, the National LGBT Bar Association, and the Uniform Law Commission.

As I wrote in 2013 of the ongoing effort to update the Model Act:

Obtaining the ABA’s ratification of model legislation is a quite lengthy process. The ABA began work on the original Model Act in the 1990s; it was finally ratified in 2008. Not surprisingly, in the time between the drafting of the Act and its ratification, many things changed in this field of law and have continued changing since.

In fact, change is a constant in the field of ART law. We have seen incredible technological breakthroughs since the world’s first “test tube baby” was born in 1978, advances that have essentially altered human understanding of parenthood and family. New technologies such as stem cell engineering, and enhancements of mature technologies such as cryopreservation, have changed how, when and which humans may reproduce, as the pace of technological advancement accelerates.

Not surprisingly, science and growing consumer demand for the newest advanced fertility treatments outpaced the legal infrastructure. In many parts of the U.S., there were no laws regulating ART, and best practices were hammered out case-by-case in the courts. When the 2008 Model Act was ratified, it provided a tried-and-true template for legislators, and ideally the potential for increased uniformity in the laws from state to state. As I wrote in 2013:

…the work of the subcommittee in establishing uniformity and codifying best practices will help alleviate the confusion and stress experienced by intended parents and attorneys attempting to make sense of the patchwork of laws that vary from state to state…. Because family law is under the purview of the states, perfect uniformity may never be achieved, but development of an updated Model Act will be a big step in that direction.

The newly ratified Model Act adds newly defined terms and updated language throughout to make the act neutral as to gender and sexual orientation. It establishes baseline best practice standards and eligibility requirements for all types of surrogacy for the safety of all participants in assisted reproduction. The new act updates parental establishment provisions for gestational surrogacy to reflect current practice and, for the first time, addresses traditional / genetic surrogacy, which was not addressed at all in 2008 Model Act, including parental establishment provisions for traditional / genetic surrogacy as well.

The newly ratified 2019 Model Act stands as the prime example of best practices and requirements for the safety of all the participants in an assisted reproduction arrangement. It addresses gestational and genetic (formerly referred to as traditional) surrogacy in ways that mirror those best practices, create predictability for the participants and the attorneys that assist them. The act echoes the modern realities of current ART parentage practices while also protecting the integrity of the intended parent doctrine. I am proud of and grateful to the many legal professionals who devoted time and effort to crafting a Model Act that will benefit thousands of intended parents and families for years to come.

For the full text of Rich Vaughn’s presentation to the American  Bar Association House of Delegates, visit https://www.iflg.net/abamidyear2019-rich-vaughn-art-model-act-speech/.