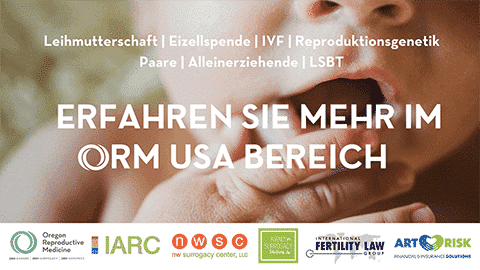 We at International Fertility Law Group are proud, in partnership with Oregon Reproductive Medicine, to officially represent the United States in the field of fertility law at the second annual Kinderwunsch Tage, or Fertility Days, February 17 and 18, in Berlin.

The event is designed for intended parents, offering educational seminars and an international village designed to showcase the myriad of options for fertility treatment available in many parts of the world: what medical treatments are available, what are the costs, what are the legal considerations, and how to begin the process. The first Kinderwunsch Tage, held in February 2017, was so successful that two are planned for 2018: this one in Berlin, and another scheduled for October in Cologne, Germany.

While prospective intended parents have been coming to the US from Germany for many years, the recent surge in interest about assisted reproductive technology and international surrogacy options in Germany may be related to a crucial ruling by the German Supreme Court on December 20, 2014. As we wrote at the time:

The German court ruled on the case of a gay German couple, both German citizens, who had a child via surrogacy in California in 2010. The county Superior Court where the child was born issued a court order naming the couple as parents; the couple then petitioned Berlin authorities to issue a birth certificate listing the two dads as parents. German authorities denied the petition, on the basis that, under German law, the California surrogate was the child’s legal mother. The California court order naming the two fathers as parents was deemed null and void.

German law automatically presumed, at that time, that the surrogate was the child’s parent. Same-sex marriage was not legal in Germany at that time, and adoption by gay or lesbian individuals was not allowed. So when the fathers returned to Berlin with their baby, German authorities refused to recognize them as their child’s legal parent—for more than three years.

On appeal, the German Supreme Court overturned the earlier Berlin court decision, saying that to deny the fathers’ parentage would be an infringement of the child’s human rights, and ordering that the two dads be recognized as the child’s legal parents. As we reported at the time, “Even though Germany prohibits surrogacy, the child born to a surrogate is entitled to have legal parents. The court observed that the child could not influence the circumstances of its birth, and a surrogacy background could therefore not be grounds to deny it its legal parents.”

We applauded that ruling in the hope it signaled a shift in German public opinion and in official support for new types of fertility treatment and new models for family formation. The tremendous success of Kinderwunsch Tage is a tangible sign that those changes are taking place. While Kinderwunsch Tage is a wonderful forum where German intended parents can learn about the many options for family formation in other parts of the world, the true sign of success will be when all German families can benefit from the technological miracles of ART, without ever leaving home.