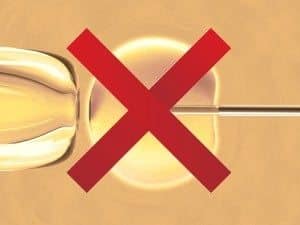 In June 2013 an Ohio jury found the Roman Catholic Archdiocese of Cincinnati guilty of discrimination against an unmarried computer technology teacher, Christa Dias, who became pregnant and had a child via in vitro fertilization. Dias, a non-Catholic, was a lesbian, but the Archdiocese did not know that at the time of her firing; she was fired because she used assisted reproductive technology to conceive and bear a child. The Archdiocese immediately appealed the verdict to the U.S. 6th Circuit Court of Appeals but then settled quietly out of court in a joint settlement with another teacher, Kathleen Quinlan, who also had a child via assisted reproductive technology and was fired explicitly because she was a lesbian, according to the New York Daily News.

The Cincinnati Archdiocese based its defense in the Dias case on a 2012 U.S. Supreme Court ruling that religious organizations may fire employees who hold “ministerial” positions, a designation that was not conclusively defined, without government intervention. Dias’ attorney argued that she was a computer science teacher, not a “ministerial” employee, and therefore her case did not fall under the 2012 decision. The jury apparently agreed.

Fast forward a year from the Dias ruling, and the Archdiocese seems to have arrived at a solution: the teacher employment contract for the 2014-2015 school is headlined with the job title “Teacher-Minister.” The contract stipulates a laundry-list of specific behaviors that teachers must promise to avoid:

The teachers of the Archdiocese are not taking the forced change in their contractual obligation lying down. Two weeks ago, at least a hundred “teachers, parents and parishioners” took to the streets in protest, according to WCPO/Channel 9, and some 24,000 supporters have signed a petition asking that the offending clause be removed from the contract.

Representatives for the Archdiocese maintain the contract is no different in intention from the contract used the prior year but merely lists specific prohibited behaviors. They say despite the protests the new contract will remain in use.

The Cincinnati cases were two among a rash of similar U.S. cases in the past few years that test how much latitude religious institutions have in discriminating against employees who do not adhere to the tenets of the religion. A February Mother Jones report lists 10 examples from schools affiliated with various religious denominations; in each case the employee was fired for becoming pregnant outside of wedlock under varying circumstances. The cases are indicative of the continuing culture war in which conservative religious institutions are struggling to balance tradition and theology with the need to remain relevant and welcoming to new generations of followers. It is sad when religious authorities equate life-enhancing technologies such as surrogacy and in vitro fertilization, which enable so many people to experience the joy of parenthood, and a personal quality such as sexual orientation, so integral to one’s individuality, with sin and dishonesty. The implications for a gay student in a Cincinnati Archdiocese school, or a student with a single mom or dad or same-sex parents, are heartbreaking: no support forthcoming. As ever it seems, two steps forward, one step back.