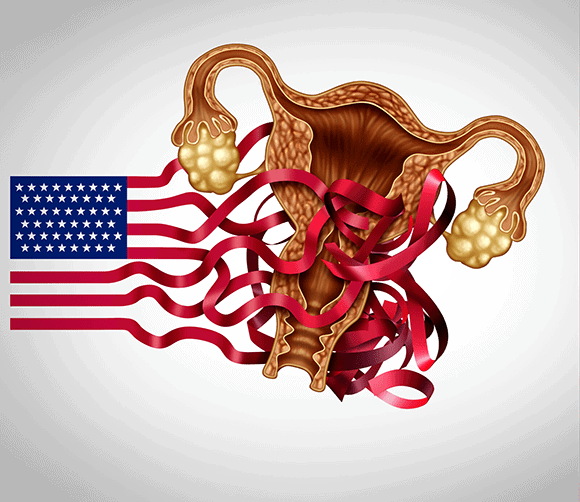 Earlier this month a federal judge temporarily blocked a Georgia law that would effectively ban abortion in the state, the latest volley in an onslaught of new state laws designed to challenge, weaken and ultimately overturn a woman’s right to choose.

As reported in The Washington Post, the new Georgia law, signed by GOP Gov. Brian Kemp in May 2019, is one of several so-called “heartbeat” laws enacted by state legislators eager to test the response of a newly conservative-heavy U.S. Supreme Court to challenges to reproductive rights. Were it not for the federal court stay on October 1, the new law banning abortion once a fetal heartbeat is detected—before most women know they are pregnant—would have gone into effect January 1. Although the new law would allow exceptions for rape, incest and the health of the mother, the federal judge ruled it violates the established legal precedent that governments may not deny women access to an abortion before the fetus would be viable outside of the womb.

With two new Trump-appointed conservative Supreme Court justices in place, and the prospect of future vacancies looming, anti-abortion activists and conservative lawmakers are flooding the lower-court pipelines in hopes one of them will be a winner in the four-decade-long battle to overturn Roe v. Wade at the U.S. Supreme Court. As reported in an excellent, informative piece by ABC News, 17 abortion bans of various types had been signed into law in 10 states as of May 2019; all 17 have been met with court challenges, and none has yet been enacted.

The new Georgia law, which states that a fetus is a “natural person” and a “human being” once a heartbeat is detected, is among a number of so-called “personhood” laws that attempt to establish legal rights for unborn embryos at various stages of development. (Here are a couple of other articles we have written on “personhood” laws: https://www.iflg.net/az-embryo-law-wapo/ and https://www.iflg.net/vergara-embryos-louisiana-personhood-law/)

In other states, legislators and advocates have attacked abortion rights from different angles, rather than tackling Roe v. Wade head-on: Since the courts forbid an outright ban on abortion, they pass laws that create obstacles making abortion services impossible for most women to obtain.

The U.S. Supreme Court will review next session a proposed Louisiana law that would require doctors who provide abortions to have admitting privileges at a hospital within a 30-mile radius. The unstated, practical result of the law would be to reduce the number of abortion providers in the state from three currently to just one. The Supreme court struck down a similar Texas law in 2016, saying that the restriction provided little if any benefit to the health of the woman because abortion complications requiring hospitalization are extremely rare. But, as noted, the liberal-conservative balance of the Court has changed since then, and lawmakers are ready to give it another try. The Court intervened in the case once already, in February, when in a 5-4 vote it blocked the law from taking effect while under appeal. As reported by Politico:

The Justices now have complete discretion on whether they want to rule narrowly on the Louisiana case in a way that leaves in place the standards set by Roe vs. Wade and Planned Parenthood vs. Casey, which states laws that place an undue burden on women seeking abortions are unconstitutional, or whether they want to revisit those decades-old precedents.

In August, as reported by CBS News, a federal court blocked a Missouri total ban on abortions after eight weeks from taking effect, although other parts of the sweeping “Missouri Stands for the Unborn Act” did take effect, including a prohibition on terminating a pregnancy due to Down syndrome. Currently there is only one abortion provider in Missouri, Planned Parenthood of St. Louis, which announced that it would comply with the law’s “reason” ban, which prevents termination of pregnancy based on race, sex or a Down syndrome diagnosis.

Other provisions of the new Missouri law, which were allowed to go into effect, reflect the strategy of creating obstacles to abortion. Medical abortions, in which a pill is used to terminate a pregnancy prior to 10 weeks, were outlawed in Missouri in 2017. Planned Parenthood of St. Louis refers calls about those types of early abortions to its Illinois facility. Under the new law the clinic is required to ask women who call whether they want to receive four pieces of anti-abortion literature, written by the state and intended to discourage abortions, and to mail the printed materials to the women at the clinic’s expense.

Politicians and anti-abortion activists say the purpose of all the regulatory obstacles and legal barriers is to reduce the overall number of abortions. But the statistics tell a different story: The number of abortions that take place out of state has skyrocketed. According to a report by The Tennessean, between 2012 and 2017, at least 276,000 women had abortions outside of their home states. Even as the total number of abortions in the U.S. has fallen, the number of women traveling to another state for abortions has gone up, particularly in parts of the South and Midwest where more restrictive laws have passed or where onerous regulations have put most abortion providers out of business. For example, in 2017, 47 percent of abortions performed in Kansas were performed on women from Missouri, one of six states in the U.S. with only one abortion provider, and it located on the far eastern side of the state.

The truth is, even before Roe v. Wade enshrined into law a woman’s right to control her own body, the wealthy and well-connected always had access to abortions. Then, it was the poor and the powerless who were forced to endure unwanted pregnancies or to undertake desperate, dangerous or illegal measures—just as today, the time and expense of traveling out of state for an abortion falls hardest on those with the fewest resources. It is an unequal injustice that was righted for millions of women with passage of Roe v. Wade in 1973. Today, in 2019, reproductive rights remain under siege. Abortion is the gateway issue for legislators and activists, but the implications of “personhood” laws for assisted reproduction-related issues, such as disposition of unused embryos, are significant.