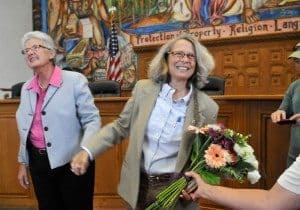 Just in time for Christmas, the New Mexico Supreme Court ruled December 19 that prohibiting same-sex couples from marrying is a violation of the anti-discrimination clause in the state’s Constitution, making New Mexico the 17th U.S. state to legalize same-sex marriage, as well as the District of Columbia.

In an opinion joined by four other justices for a unanimous vote, Justice Edward L. Chávez wrote: “We conclude that the purpose of New Mexico marriage laws is to bring stability and order to the legal relationship of committed couples by defining their rights and responsibilities as to one another, their children if they choose to raise children together, and their property. Prohibiting same-gender marriages is not substantially related to the governmental interests advanced by the parties opposing same-gender marriage or to the purposes we have identified. Therefore, barring individuals from marrying and depriving them of the rights, protections, and responsibilities of civil marriage solely because of their sexual orientation violates the Equal Protection Clause under Article II, Section 18 of the New Mexico Constitution.

“We hold that the State of New Mexico is constitutionally required to allow same-gender couples to marry and must extend to them the rights, protections, and responsibilities that derive from civil marriage under New Mexico law.”

New Mexico has been an interesting case to watch because it was the only state in the U.S. whose laws neither allowed nor prohibited same-sex marriage. When six couples filed suit to win the right to marry in March, several county clerks, beginning with Dona Ana County Clerk Lynn Elkins, began issuing marriage licenses to same-sex couples. Since then, some 900 couples New Mexico same-sex couples have married. The high court’s ruling was a response to the request of the New Mexico Association of Counties and the state’s 33 county clerks to clarify the state’s legal position. From the written opinion: “At the time this petition was filed, eight New Mexico counties were issuing marriage licenses to same-gender couples, while twenty-four were not. By October 23, 2013, the date of oral argument before this Court, over 1,466 marriage licenses had been issued.”

Opponents argued that even though New Mexico law did not specifically prohibit same-sex marriage, its statutes dictated that the marriage license form contain the gender-specific terms “husband” and “wife.” The Court agreed that the statutory restriction existed, then ruled that the requisite language was discriminatory under the state Constitution. As of this writing, it was unclear when all 33 New Mexico counties would begin issuing marriage licenses to same-sex couples.

Further, the opinion addressed the harm caused to the offspring of same-sex couples by denying the legal recognition of marriage: “Excluding same-gender couples from civil marriage prevents children of same gender couples from enjoying the security that flows from the rights, protections, and responsibilities that accompany civil marriage. There is no substantial relationship between New Mexico’s marriage laws and the purported governmental interest of responsible childrearing. There is nothing rational about a law that penalizes children by depriving them of state and federal benefits because the government disapproves of their parents’ sexual orientation.”

Altogether, an eloquent defense of the principle of equality for all families, and one we hope will be a model for future court opinions.

For more information about the ruling, see the Albuquerque Journal or Bloomberg.com.