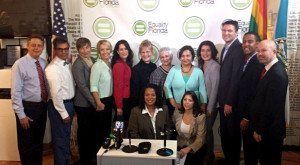 Six couples and Equality Florida Institute filed suit yesterday asking a Florida state court to overturn Florida’s ban on same-sex marriage on the grounds that it violates their rights under the U.S. Constitution. The plaintiffs, which include four couples with young children in the home and one couple with an adult child and grandchildren, are represented by law firm Carlton Fields Jorden Burt, attorney Elizabeth F. Schwartz, attorney Mary B. Meeks, and the National Center for Lesbian Rights (NCLR), according to a news release issued by NCLR and Equality Florida Institute.

At a time when laws prohibiting same-sex marriage have been overturned or are being challenged all over the U.S., the Florida suit stands out because the state historically has been especially averse to LGBT equal rights. As reported by The Miami Herald, in 2008, almost 62 percent of voters passed Amendment 2, which “amended the state Constitution to ban gay marriage, along with recognition of legal same-sex marriages performed elsewhere and domestic partnerships.” Under a 1977 ordinance “homosexuals” in Florida were prohibited from adopting children, a ban finally overturned in September 2010 by the Third District Court of Appeals in a case binding on lower courts.

Gay activists believe public opinion in Florida has changed since the 2008 defeat at the ballot box, reports The Miami Herald.

A March 2013 survey by Public Policy Polling found 75 percent of Florida voters favor allowing gay people either to marry (38 percent) or to have civil unions (37 percent).

“Florida has often been on the cutting edge for civil rights issues and protections for the south, culturally and politically. An influential state. What happens in Florida really matters, not only for the folks here, but across the whole country.”

Despite changing public opinion, the Florida suit is expected to take years to make its way through the court system; the state’s political leadership remains opposed to same-sex marriage, and Attorney General Pam Bondi is expected to vigorously defend the state’s ban.

Several of the plaintiffs in this week’s filing spoke of their desire to win equal protection for their families. Currently the non-biological parent in a same-sex couple who has children via assisted reproductive technology in Florida is required to undergo a second-parent adoption.

Were same-sex marriage to be legalized, it is quite likely that both spouses would be automatically deemed legal parents of children born within the marriage, subject of course to a court order of parentage, which is required in surrogacy cases in Florida.

Two of the plaintiffs in the Florida case, Dr. Juan Carlos Rodriguez and David Price, have been together for nearly 18 years and are parents of 3-year-old twins, a boy and a girl, according to the Equality Florida Institute news release. “Being a doctor, I see people and families in crisis all the time,” said Rodriguez, a specialist in pulmonary medicine. “In those situations, family and the legal protections that come with it are critical. It pains David and me to be denied a basic safety net of legal protections.”

Here’s hoping that equal protection under the law comes swiftly for the Rodriguez-Price family and for all Florida families.