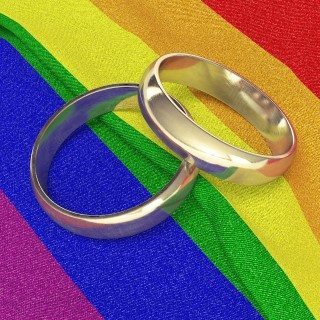 Proponents of marriage equality have a lot to celebrate as we near the beginning of a new year. Since January 1, 2014, courts in 20 states have overturned bans on same-sex marriage, for a total of 35 states where marriage equality is the law of the land—63.45% of the U.S. population, according to advocacy organization Marriage Equality USA.

Still, in many parts of the country, LGBT people and their families don’t have the legal recognition of marriage and, even in some cases where courts have overturned bans, local officials continue to stonewall or have obtained stays. The result: confusion, complexity, frustration and heartache for thousands of couples, their children, families and friends.

One such scenario is still playing out in Missouri. In June the city clerk of St. Louis, Missouri, effectively challenged Missouri’s constitutional amendment banning same-sex marriage by issuing four marriage licenses. Although she agreed to stop issuing marriage licenses, the clerk asked the court for a declaration authorizing same-sex couples to marry in Missouri. On November 5 Circuit Judge Rex Burlison granted her request, declaring the state's ban on same-sex marriages unconstitutional and ordering registrars to start issuing licenses to gay and lesbian couples. However, Missouri Attorney General Chris Koster has appealed the ruling to the state Supreme Court, citing the need to defend Missouri voters’ right to define marriage, MSNBC reported.

Meanwhile Missouri had already started recognizing same-sex marriages performed in other states following an October ruling by Jackson County Circuit Judge J. Dale Youngs, according to The Kansas City Star. Republican state legislators attempted to appeal Youngs’ ruling to the state Supreme Court; on Dec. 11 Youngs denied the state legislators’ motion, saying time had run out and the case is no longer under his jurisdiction.

Once source of confusion is whether a federal ruling in one state is binding on other states within the same circuit, as many legal experts have claimed. Writing for Jurist, Topeka law professor Jeffrey D. Jackson, argues those rulings are not binding in states where same-sex marriage bans have not been challenged. For example, in October, the U.S. Supreme Court denied certiorari—refused to hear—seven cases from the Fourth, Seventh and Tenth Circuits in which same-sex marriage bans had been overturned, leaving the lower court rulings to stand. But in Kansas, located in the Tenth Circuit, the ban on same-sex marriage had not been challenged in federal court.

Jackson writes, “Unlike decisions from the U.S. Supreme Court, decisions of a federal circuit court are not binding on the constitutionality of state laws that are not at issue in the case.

“Thus, even though Kansas's law was almost indistinguishable from the laws that the Tenth Circuit had struck down in Utah and Oklahoma, and therefore would almost certainly meet the same result were it challenged in federal court, the fact remained that it had not been. Therefore, it remained the law of the state.”

In Kansas, Jackson continues, the result was confusion and disappointment. Early news reports indicated that all the Utah and Oklahoma rulings meant that Kansas same-sex couples could now legally marry. Some tried and were turned away. The chief judge of the Tenth Judicial District, in an attempt to provide clarity, issued an administrative order instructing officials to issue marriage licenses to same-sex couples. Fifty-one applications for marriage licenses for same-sex couples were approved and one same-sex marriage took place before the Kansas Supreme Court issued a temporary stay on same-sex marriages. Two couples who were denied marriage licenses sued in Kansas federal district court. The federal district court issued a preliminary injunction allowing same-sex marriage on the grounds that the plaintiffs probably would prevail in the Tenth Circuit, but then stayed its ruling until November 11 to allow the other side to appeal. The Tenth Circuit appeals court denied the stay, and the defendants took their case to the U.S. Supreme Court, which granted a temporary stay, only to lift it two days later. On Nov. 18 the Kansas Supreme Court followed suit, lifting its stay.

Gay marriage proponents, including the American Civil Liberties Union, declared victory, claiming the matter was now settled, same-sex marriage now legal in the state of Kansas. But the issue remains in legal limbo, Jackson writes. “While a declaration that Kansas's ban is unconstitutional would indeed have to be followed, no such declaration currently exists. Rather, the preliminary injunction extends only to the defendants in the federal district court case, and enjoins only them from enforcing or applying the bans.”

The upshot: As of November 20, “approximately 24 of Kansas's 105 counties have decided to issue marriage certificates to same-sex couples.” Under state law, same-sex couples now can get married anywhere in Kansas, but they may have to obtain their license from a different county. Moreover the “validity and effect of those marriage” remains in question, Jackson writes.

“Because there has been no definitive federal or state ruling on the constitutionality of the Kansas ban, the state has continued to enforce the ban where not prohibited by the injunction. The state has taken the position that it will not otherwise recognize those marriages for purpose of benefits such as name changes or employee benefits. Until there is a final determination, it is not clear whether any of the marriages entered into so far are valid. While it would seem inconceivable that a final decision, whether at the district court, Tenth Circuit, or U.S. Supreme Court, would uphold Kansas's ban at this point, the matter is still up in the air.”

The resulting confusion and worry for same-sex couples in Kansas and their families is a result of the U.S. Supreme Court’s reluctance to rule definitively on the constitutionality of denying same-sex couples the right to marry, Jackson claims.

As we celebrate the remarkable progress we made toward marriage equality and legal recognition of all families in 2014, we hope the Supreme Court justices will keep in mind that, while there may be a valid argument for waiting to make sure judicial rulings are aligned with the hearts and minds of the majority of Americans, real people suffer from lack of legal clarity and unevenly applied law. The events of 2014 make it clear that marriage equality is inevitable in the United States; in 2015 it will be time for the U.S. Supreme Court to make it official.