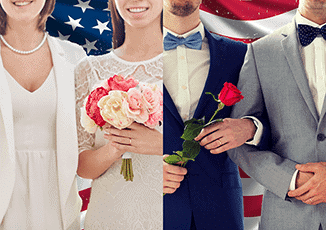 We at IFLG mourn the passing of Edith Windsor, the courageous woman whose demand that her government treat her and her marriage with fairness brought down the U.S. Defense of Marriage Act (DOMA) and paved the way for marriage equality in the United States.

Windsor and Thea Spyer met at a Greenwich Village restaurant in the 1960s and would live together as romantic partners for 40 years, finally marrying in Toronto in 2007 as Spyer’s health declined. Following Spyer’s death in 2009, Windsor, recognized legally as Spyer’s widow by the state of New York, filed for the federal estate tax exemption for surviving spouses. The IRS denied her claim under Section 3 of DOMA, which said that same-sex marriages were not considered marriages under federal law, even if those couples were considered legally married by their home states.

The U.S. Congress had passed DOMA in 1993, in a knee-jerk reaction when it seemed Hawaii might become the first U.S. state to legalize same-sex marriage. Designed to offer conservative state leaders legal cover to avoid recognizing same-sex marriages performed legally in other states, DOMA trampled the time-honored legal principle, codified in Article IV of the U.S. Constitution, of giving “full faith and credit” to the “public acts, records and judicial proceedings of every other state.”

Thanks to DOMA, Windsor was not considered to be a widow under federal law, and the IRS sent her a bill for $363,053 in estate taxes. In a 2013 NPR interview, she told Nina Totenberg, “If Thea was Theo, I would not have had to pay that… It's heartbreaking. It's just a terrible injustice, and I don't expect that from my country. I think it's a mistake that has to get corrected.”

“On a deeply personal level, I felt distressed and anguished that in the eyes of my own government, the woman I had loved and cared for and shared my life with was not my legal spouse, but was considered to be a stranger with no relationship to me,” she told CNN following the Supreme Court decision.

At age 80, Edie Windsor decided to fight back. She turned to several gay rights organizations to take her case; all declined, fearing it was premature to challenge DOMA in the existing political and social environment. Finally, she was referred to Roberta Kaplan, a partner at the law firm of Paul, Weiss, Rifkind, Wharton & Garrison LLP, who agreed to represent Windsor pro bono. Kaplan had earlier unsuccessfully defended the plaintiffs in Hernandez v. Robles, which challenged New York’s same-sex marriage ban. She and Windsor were members of the same Jewish congregation. And, like Windsor and Spyer, she and her partner had married in Toronto, in 2005.

“I lucked out when Robbie Kaplan, a litigation partner at the law firm of Paul Weiss, walked into my life,” Windsor told CNN in 2013. “At a time when the gay organizations that I approached responded with, ‘It's the wrong time for the movement,’ Robbie Kaplan said -- as did the Rev. Martin Luther King Jr. before her – ‘There is no wrong time’ to seek justice. She answered my plea, and took me on.”

On November 9, 2010, Kaplan’s firm, in conjunction with the American Civil Liberties Union, filed suit in the U.S. District Court for the Southern District of New York. On February 23, 2011, U.S. Attorney General Eric Holder announced the federal government would no longer defend the constitutionality of DOMA’s Section 3. In June 2012, Judge Barbara S. Jones ruled that Section 3 was unconstitutional and ordered the U.S. government to issue Windsor a tax refund, with interest. The government appealed, and in October 2012, the U.S. Court of Appeals for the Second Circuit upheld the earlier decision.

DOMA instructs all federal officials, and indeed all persons with whom same-sex couples interact, including their own children, that their marriage is less worthy than the marriage of others. No legitimate purpose overcomes the purpose and effect to disparage and to injure those whom the state ... sought to protect in personhood and in dignity.

Of course, the financial justice aspects of the Supreme Court DOMA ruling made a life-changing difference to Windsor and to all same-sex married couples. But it was never just about the money. As Windsor told NPR about the time the Supreme Court was considering whether to take the case:

“The fact is, marriage is this magic thing,” she said. “I mean, forget all the financial stuff—marriage... symbolizes commitment and love like nothing else in the world. And it's known all over the world… And I've asked everybody since who gets married after long-term relationships, 'Did it feel different the next day?' and the answer is always 'Yes, absolutely.'"

Windsor’s bravery and determination in the face of injustice makes her an American hero, and in the years following her court victory she continued to advocate for and inspire a new generation of LGBT activists. At the time, the LGBT and legal establishments were fearful she was pushing too far, too fast, risking political backlash, as had happened in California in 2009, when the State Supreme Court legalized same-sex marriage in June, only to have voters pass Proposition 8 in November.

But, matched with an equally courageous attorney, it turns out, Edith Windsor was exactly in the right place at the right time to make legal history and better the lives of countless couples and families in the process.