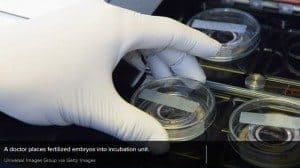 Amid all the headlines about the one-year anniversary of Hurricane Sandy, so many sad stories of communities still struggling, people who lost homes and businesses, this amazing story about fertility professionals who went above and beyond to salvage the hopes and dreams of intended parents really hits home.

Located in Manhattan just one block from the East River, the NYU Fertility Center lost power after Hurricane Sandy hit. A backup generator on the roof kept the incubators holding embryos at womb temperature running. But then the basement flooded, cutting off the fuel supply to the generator. Clinic staff, including center Director Dr. Jamie Grifo, hauled 5-gallon fuel containers up eight flights of stairs in the dark to keep the generator running.

At the time of the storm, several clinic patients were undergoing a two-week program of drug injections to cause them ovulate, and some had already received a “trigger shot” that causes the eggs to be released for collection, exactly 35 hours following the injection—no turning back. One woman was scheduled for an egg retrieval procedure at 10 a.m. the morning after Hurricane Sandy struck. Grifo loaded her, her husband and one-year-old baby into his car and drove them to a competing clinic, which welcomed the patient. The woman had a baby resulting from that procedure. Other competing clinics from all over the city called and offered operating rooms and office space for patient monitoring. Embryos retrieved during the storm were frozen for later implantation. To date six babies, known as “Sandy Saves,” have been born from cycles that occurred during Hurricane Sandy, and seven other women are pregnant with eggs or embryos saved during that time.

Dr. Grifo will receive the National Infertility Association’s Hope Achievement Award on November 6, along with Manhattan’s New Hope Fertility Center, which is being honored for its work taking in patients of clinics impacted by the storm.

This story warms the heart and makes me even more proud to be working in this field of law, because it demonstrates that behind the fertility “business,” which can be highly competitive, are people who, when push comes to shove, place the well being and happiness of their patients above all else. Here is a link to a November 2012 article written shortly after the storm about Dr. Grifo and his center’s heroic rescue effort.