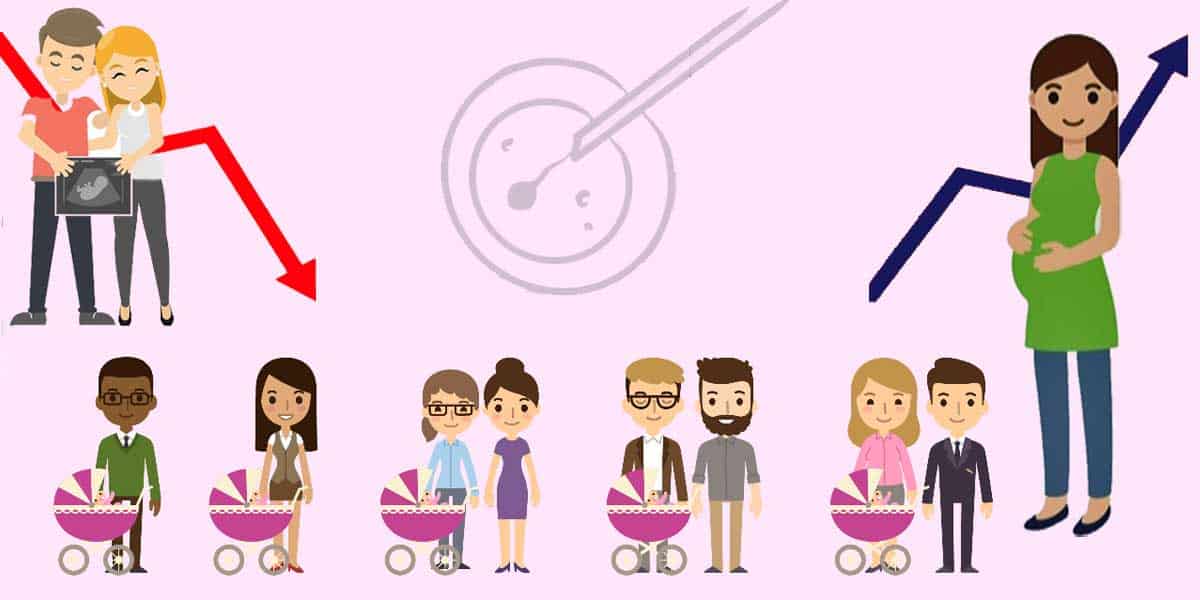 Human birth rates have been dropping for decades, over approximately the same period that assisted reproductive technology (ART) has become increasingly efficient, reliable and accessible as a family-building solution. According to a new study by the University of Washington's Institute for Health Metrics and Evaluation, the main factor in declining birth rates is the same one that has led to the increased use of ART: many educated, working women and couples are choosing to wait longer to start their families and to have fewer babies when they do.

The study concludes, “Continued trends in female educational attainment and access to contraception will hasten declines in fertility and slow population growth. A sustained TFR lower than the replacement level in many countries, including China and India, would have economic, social, environmental, and geopolitical consequences. Policy options to adapt to continued low fertility, while sustaining and enhancing female reproductive health, will be crucial in the years to come.”

As a law firm specializing exclusively in ART law, we at International Fertility Law Group have seen the transformative effect of assisted reproduction, thousands of times, in empowering individuals to create the families they have always dreamed of. Now, as we consider our future on a planet declining birth rates, it seems likely assisted reproductive technology will become increasingly attractive as countries work to counter that trend.

Why Population Crash Is a Problem

Decades before the COVID-19 pandemic changed daily life as we know it, the global birth rate had already started dropping, according to a BBC report on the new study. By 2100, the planet’s human population is expected to begin declining, with the populations of 23 nations—including Spain and Japan—expected to drop 50 percent.

While a lower birth rate may be beneficial in terms of environmental health and resource conservation, it also means there will be more and more old people, as fewer babies are being born and life expectancy—how long people are expected to live—continues to grow. As a result, fewer and fewer people of working age will be available to support a growing population of elders—a demographic shift that will significantly impact commerce and the labor force.

How Assisted Reproductive Technology Can Help

Since the birth of the first “test-tube babies” in the 1970s, the development of advanced assisted reproduction technologies—such as in-vitro fertilization, egg donation or sperm donation, cryopreservation or even surrogacy—has expanded the childbearing horizons for millions of people. According to the American Society for Reproductive Medicine (ASRM.org), approximately 10 percent to 15 percent of couples suffer from infertility, and some 6.7 million reproductive-age women in the United States have difficulty conceiving or bearing a child. For those who don’t respond to conventional medications or surgical treatment, ART provides additional, increasingly effective options.

In today’s modern society, as more women pursue advanced educational and career goals, ART has offered women more choices. Rather than being forced to choose between pursuing a promising career or starting a family, women today, thanks to the availability of technologies such as egg freezing and in-vitro fertilization (IVF), often can do both.

That is not to say the dreaded “biological time clock” is no longer an issue. The mother’s age continues to be one of the primary predictors of successful in-vitro fertilization, gestation and birth. As we wrote back in 2013:

Many couples today focus on becoming financially stable, progressing in their career, or buying a home, before they consider becoming parents. In other cases, it may take years to find the Ms. or Mr. Right with whom to start a family, or illness may prevent one from starting a family. In short, there are a plethora of reasons people delay family formation. The hitch is, when the time finally is right, a woman may no longer be physically in her prime in terms of fertility. Assisted reproductive technology methods offer hope to mature couples looking to build a family later in life, when conception may otherwise be a challenge.

As we have written, biological age continues to be a factor for women planning to have a career first and kids later—even when assisted reproductive technology is an option. Girl babies have about a million eggs at birth, but that number declines throughout life. By age 40, remaining eggs may be of poor quality. Conception, either natural or assisted, becomes more difficult. Some clinics will perform IVF on women in their 40s and 50s; however, after age 35, women’s eggs tend to be less viable and more difficult to fertilize. For women who want to give birth themselves, pregnancy and birth also become more difficult with age.

To some people, the prospect of a declining birth rate and fewer people on the planet sounds like nirvana. In that not-so-distant future, with a dwindling number of young left to provide for growing numbers of old, assisted reproductive technology may be a welcome tool to help governments and societies adapt and restore a healthier balance.

The experienced fertility lawyers and paralegals of International Fertility Law Group have worked with thousands of intended parents from more than 55 countries to legally protect their families. To learn more about ART, or for legal assistance in starting your future family using assisted reproductive technology, call us today.