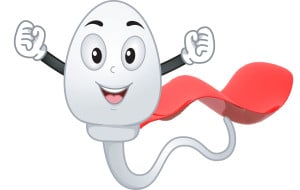 An exciting new technology offers the promise of diagnosing mysterious and rare causes of infertility by using nanoparticles to penetrate sperm. Eventually researchers hope to use the same technology to treat the conditions causing the sperm to be infertile.

Historically, working with sperm has been difficult because of their small size, shape and the fact they survive only a short time outside the body. Researchers at the Nuffield Department of Obstetrics and Gynaecology at Oxford University discovered they could penetrate and study sperm using porous silica nanoparticles loaded with compounds capable of identifying, diagnosing and potentially treating sperm defects. Placed in a petri dish, the nanoparticles are able to quickly infiltrate the sperm while they are still viable. The method has been tested on boar sperm, which are similar to human sperm in size, shape and activity, with no damage to the sperm. The next step is to test the technology on humans.

Different types of nanoparticles are being used in all kinds of ways, from delivering cancer medications directly to cancer cells, to medical imaging such as MRIs, to self-sanitizing toothbrushes and washing machines. “An attractive feature of nanoparticles is that they are like an empty envelope that can be loaded with a variety of compounds and inserted into cells,” said Dr. Natalia Barkalina, lead author of the Oxford University study, as quoted in ScienceDaily.com.

According to the American Fertility Association, “Infertility affects 10 to 15% of couples who are trying to conceive.” Men who are infertile bear a particularly heavy burden of stress, the AFA reports.

If stress leads to infertility, then infertility leads to more stress. A vicious cycle is formed with what looks like a dead end. This emotional strain often leads to depression, low self-esteem, and eventual marital problems, which contribute to the stress couples already face.

In another piece of exciting technology news, healthy sperm are being enlisted and transformed into “spermbots” that can be used to fertilize eggs but also to deliver medications to specific parts of the body or in gene manipulation. The “spermbots” are made of live sperm cells inside magnetic tubes created from thin titanium and iron film. The tubes can be magnetically directed to a specific part of the body and are even capable of guiding a specific sperm cell to a specific egg cell.

Nanotechnology is still a brand-new field of science, and we have no doubt merely scratched the surface of its future capabilities for fertility treatment and assisted reproductive technology—great news for thousands of would-be parents.