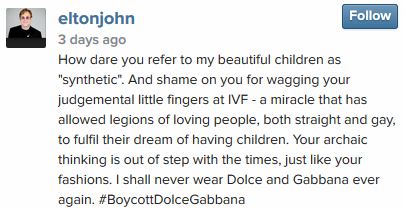 17 Mar Dolce & Gabbana Celebrate Mothers, But Only the ‘Right Kind’

It’s hard to imagine what Italian fashion designers Domenico Dolce and Stefano Gabbana were thinking when they not only spoke out against gay adoption but spoke of the children born via assisted reproductive technology in the most hurtful and dehumanizing terms possible. You would think a couple of jet-setting multimillionaires whose high-profile label is seen on red carpets and catwalks worldwide could spring for the assistance of a good PR firm.

In a recently published interview with the weekly Italian news magazine Panorama, the designers, who are themselves gay and who were in a romantic relationship for more than two decades, said, “The only family is the traditional one … No chemical offsprings and rented uterus: Life has a natural flow, there are things that should not be changed,” according to an English translation of the published interview. Dolce added, “You are born to a mother and a father—or at least that’s how it should be. I call children of chemistry, synthetic children. Uteri [for] rent, semen chosen from a catalog.”

The reaction on social media and in news headlines was instantaneous. While conservative Italian politicians defended the designers’ right to their opinions, the majority of the celebrity and affluent patrons who have made the pair rich by purchasing and promoting the Dolce & Gabbana brand expressed outrage. Most visibly, Elton John, who with spouse David Furnish is dad to two sons born via in vitro fertilization and surrogacy, took to Instagram in response, launching a #BoycottDolceGabbana campaign that quickly went viral. “How dare you refer to my beautiful children as ‘synthetic.’ And shame on you for wagging your [judgmental] little fingers at IVF—a miracle that has allowed legions of loving people, both straight and gay, to [fulfill] their dream of having children,” John posted.

The designers have raised waves before: in 2006 Gabbana said in an interview that he opposed allowing gay couples to be parents. In the wake of Elton John’s boycott post and the groundswell of criticism, the designers, while defending their rights to express their opinions, also seemed to be trying for a softer approach.

Dolce released a statement saying, “it was never our intention to judge other people's choices. We do believe in freedom and love,” and “I am very well aware of the fact that there are other types of families and they are as legitimate as the one I've known.”

Too little too late, it seems, judging from the growing list of outraged celebrities condemning the designers’ remarks.

There have always been gay and lesbian people who oppose same-sex marriage for a variety of reasons: they feel it’s not an issue worth spending resources on, they see marriage as a heterosexual institution, or same-sex marriage doesn’t mesh with their personal religious beliefs. For the most part those differences of opinion have been accepted within the LGBT community.

The D&G comments seemed to come from a very different place. To state that gay and lesbian people should not be parents seems not only punitive but also implies gay and lesbian people are not fit to raise children. A growing body of research contradicts that assertion. In fact, an Australian study published in the Washington Post last summer found that children of same-sex parents were happier and healthier than their peers.

But the designers’ opposition to gay parenting aside, the fact is the majority of people who create families via ART are not gay or lesbian; most are straight people who for a whole range of reasons are unable to conceive. Many got caught in the societal trend of waiting longer to marry and start families; time and age caught up to them, and ART offered them the chance to have the families they dreamed of. Others turn to ART because of infertility caused by medical conditions or tragic accident.

All were tarred with the same brush by Dolce and Gabbana. To describe people’s most precious possessions—their cherished children, who in many cases they sacrificed greatly to conceive—as “chemical offspring” and “synthetic” is mind-blowing, to say the least. Even Today Show co-anchor Al Roker—Al Roker!—took to Twitter in response: “In spite of what @dolcegabbana think, my beautiful IVF children are not ‘synthetic children,’” he wrote.

Adding irony to incredulity at the obtuseness of D&G’s seemingly clueless insults, the pair’s Fall-Winter 2016 line, rolled out last month at Milan Fashion Week, is themed “Viva la mamma,” a celebration of pregnancy and motherhood. Models carrying babies or displaying belly bumps walked the catwalk in D&G couture. Motherhood and family are wonderful things to celebrate. It’s just too bad that in the designers’ minds, not all mothers and families are created equal.